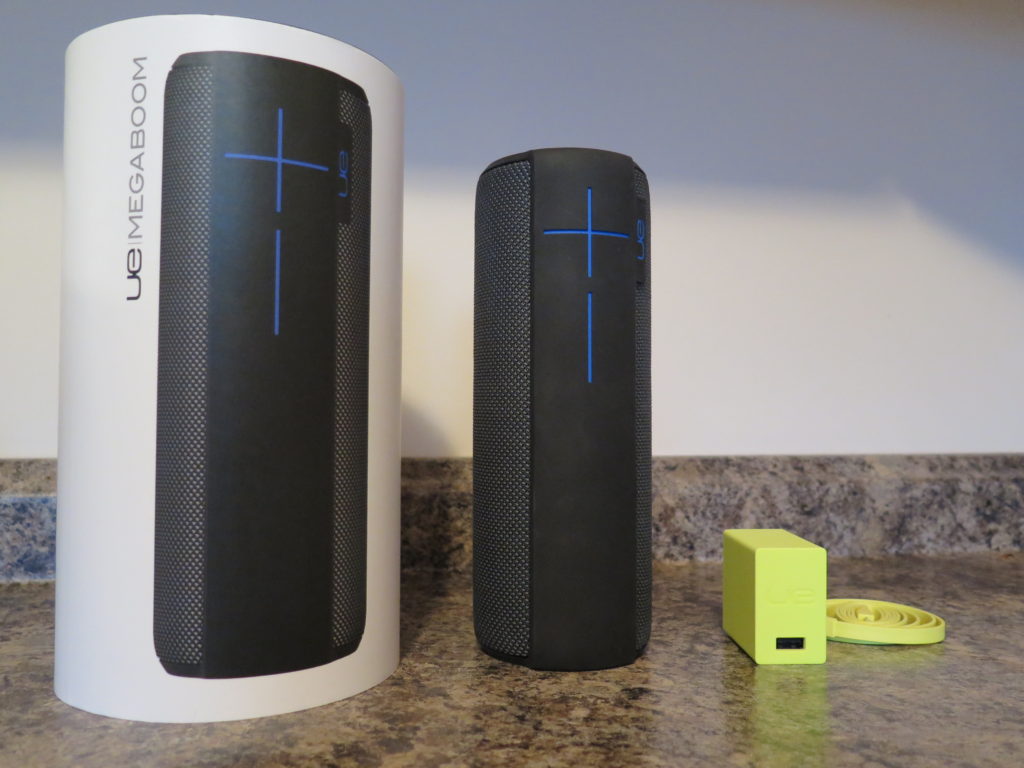 The MEGABOOM, it’s packaging, and the power adapter.

With the release of the iPhone 7, there has been more and more releases and announcements of wireless earphones. While wireless earphones are fairly new in the market, wireless speakers have been around for much longer. Because they have, this has given speaker manufactures more time to perfect their products. Logitech’s UE MEGABOOM is one of those speakers that hits all the right notes, with only a few minor kinks.

The entire presentation of the UE MEGABOOM is very nice. On the front of the case, it displays the speaker itself. Rotating the packaging to the back reveals it’s key features, such as 360 degrees of sound, IPX7 Waterproof rating, 20 Hours of battery life, and a 100ft range for Bluetooth devices. Sliding it off reveals a carrying case, with the speaker, power adapter, and Micro USB Cable. The UE MEGABOOM comes in a variety of colors. Mine is the Black/Blue, which I thought matches rather nicely with Apple’s new color options for the iPhone 7. Oddly, however, is that the Micro USB cable and power adapter are bright yellow. While I don’t mind yellow, I did find it odd that it didn’t match either the Blue or Black of the speaker.

It’s tubular design really helps with the functionality of the device. You can have it upright, with the power and Bluetooth buttons at the top, or you can have it upside down and have your “legacy” devices plugged in via it’s AUX port. It also means you can still listen to music while it’s charging. But the best thing about it’s design is the 360 audio. It means that no mater where you are around the speaker, you are still getting the same sound quality. 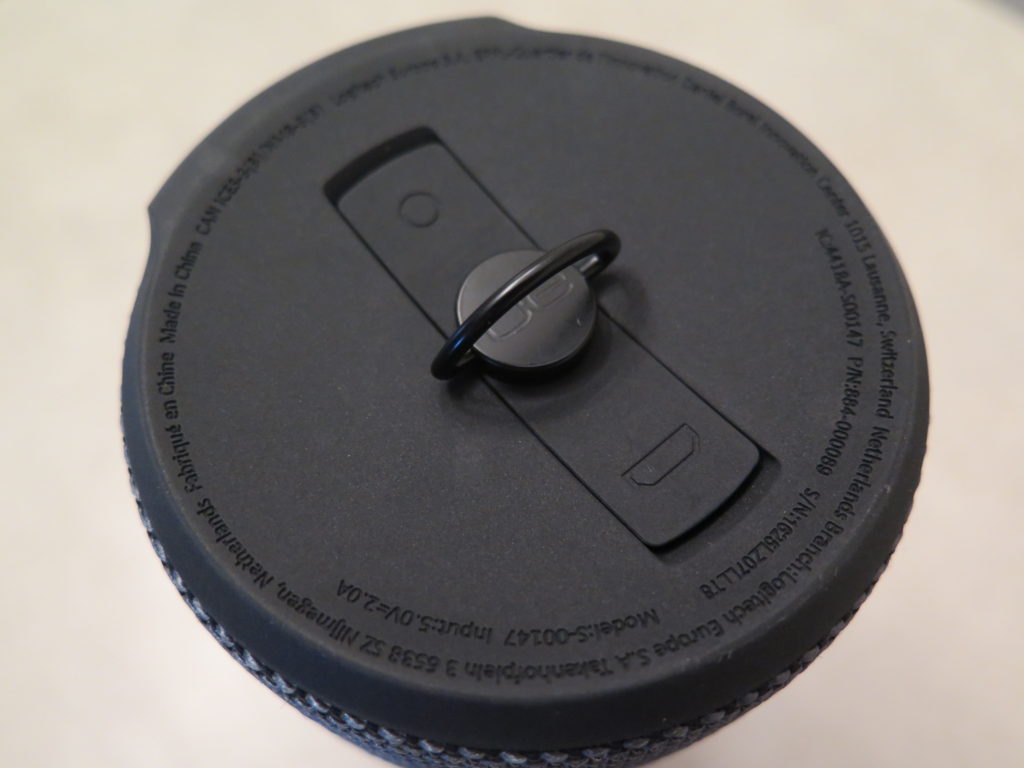 You can also attach the MEGABOOM to a carabiner… 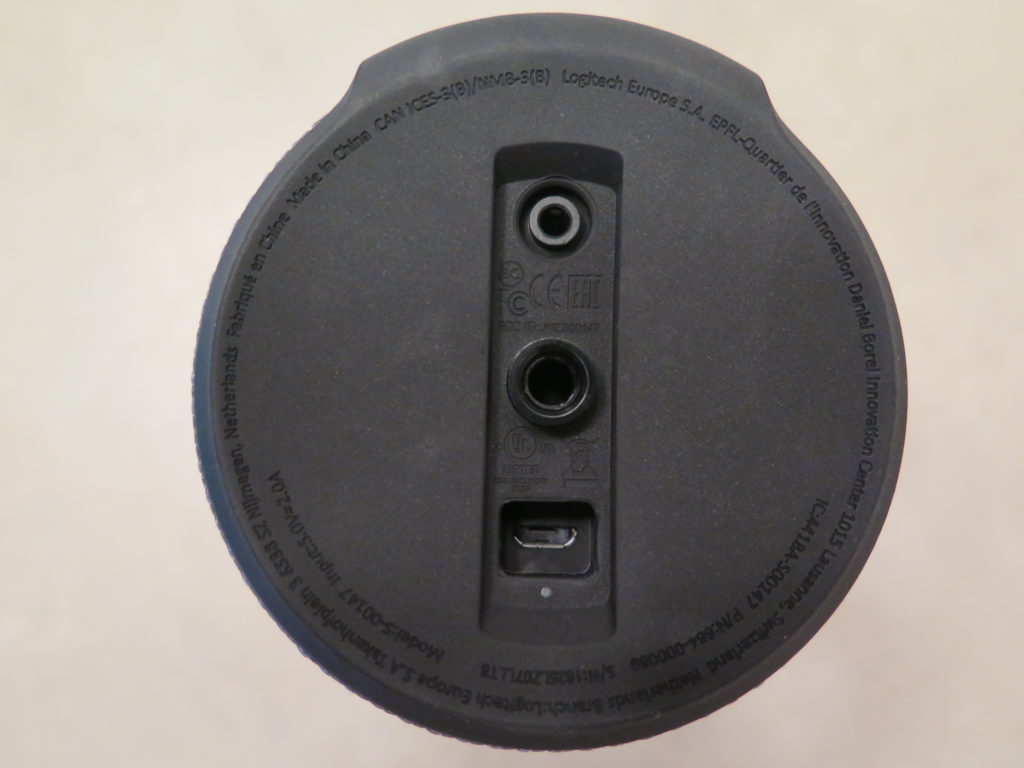 The two giant volume buttons are great for adjusting the music when you’re not near your phone. In case you’re wondering, they are actual buttons, not touch sensitive. While the majority of speakers have volume controls, the giant buttons on the UE MEGABOOM give it it’s unique look, and I think it looks rather stylish. 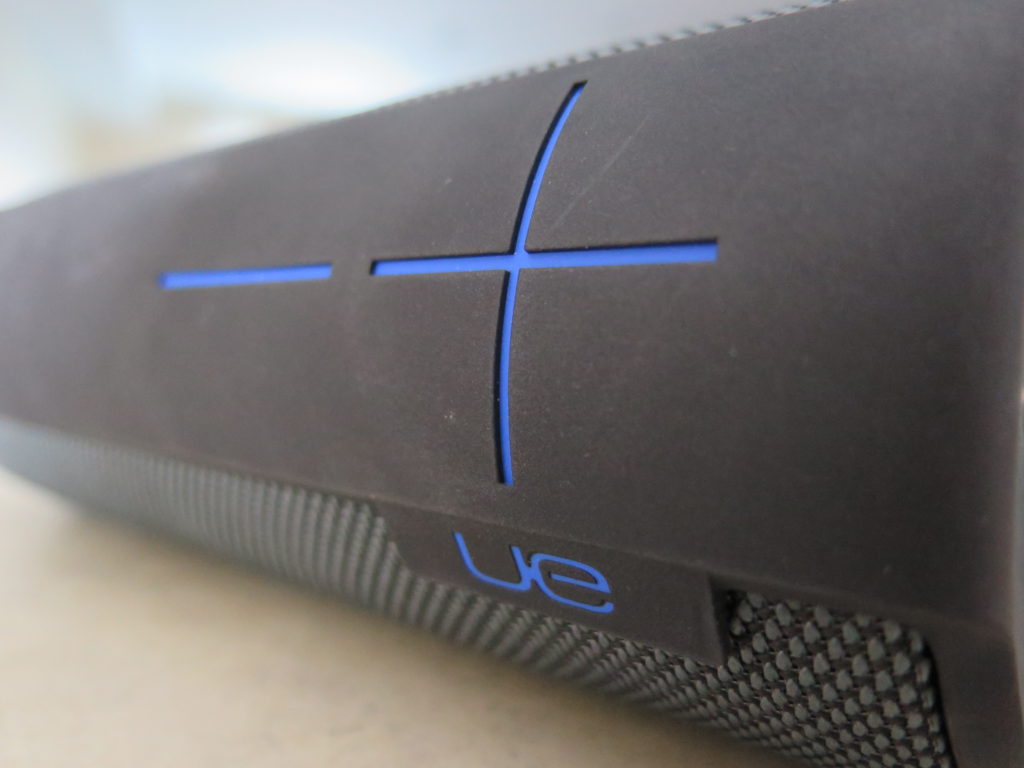 The giant volume buttons on the MEGABOOM make it immediately recognizable

Besides it’s main feature being the 360 degree sound, the MEGABOOM still has some other great features. It’s waterproof, for one. Up to a meter for 30 minutes. So while you might not want to go diving with it, for a beach party, the MEGABOOM will work great. It’s also got a huge battery. It’s featured up to 20 hours, but you’ll probably get even more. You’re more likely to get around 25; more than a full day!

One of the neat features is the app. If you pair the MEGABOOM to a mobile device, it’ll ask you if you want to download the app. While it’s not required whatsoever to use the speaker, it does allow you to access some great features. One of the most convenient, in my opinion, is the ability to remotely turn on and off the speaker. This is great when you don’t want to get up, but it can also be handy for if you misplaced it. The app also allows you to pair up with other MEGABOOM and BOOM 2 speakers. Fifty in total, to be exact. If you pair it with other MEGABOOMs, you can use it in Stereo mode for a truly impressive experience. Unfortunately, you can’t do the Stereo mode while using a combination of the MEGABOOM and the BOOM 2. According to Ultimate Ears, this is due to the speakers having different sound signatures, so the sound would not be ideal. It still works good despite that though. The range is limited to the distance between the two speakers, but it still gives you some flexibility. You can also access an equalizer in the app to get the exact sound that you want. 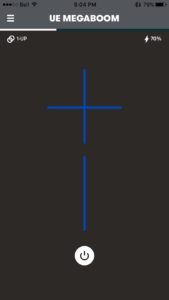 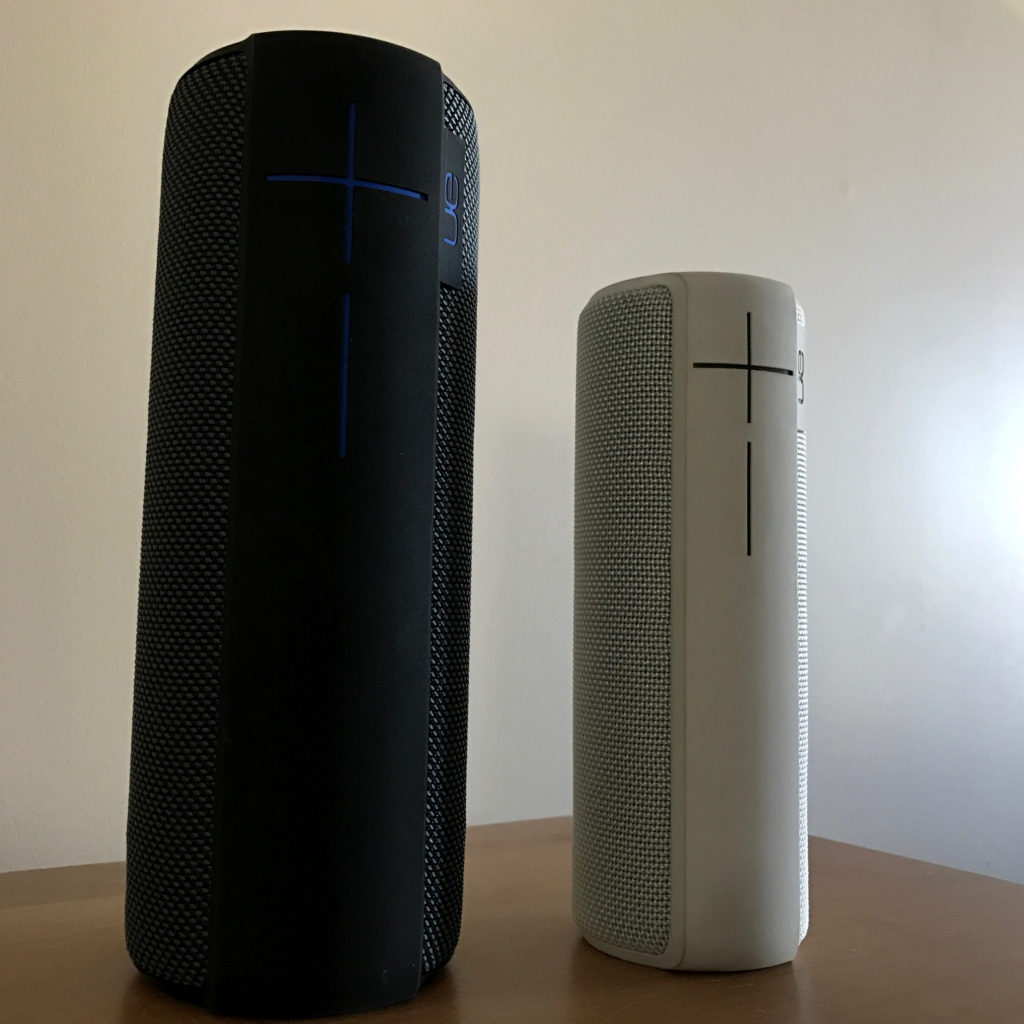 Another feature you can enable through the app is the Tap Controls. Taping the top once toggles playback, double tapping skips the song. While it sounds good in practice, I found it rather finicky. You hand needs to cup it just right, and it only works when it’s not sitting flat; something I found to be bizarre. I also found it often paused the music rather then going to the next song. It’s for these reasons why I’m assuming it’s disabled by default.

The app also has an alarm function, which I thought was a nice touch. You can also update the firmware through the app, which can be used for fixing bugs and new features. One thing I wish is that there wasn’t a need for a separate app for each speaker. It would be nice to have all your speakers in one “UE” app, but it’s not that big of a deal, especially if you only have one speaker.

Probably the most important thing about a speaker is it’s sound quality. And for that, the MEGABOOM scores well. For sheer volume, this speaker can get impressively loud for it’s relatively small footprint. Around the 60 to 70 percent range is where I would have it loud in my duplex. I’m pretty sure my neighbours could hear it when I reached 100. Yet, even at full volume, I noticed little if any distortion. The bass is very firm and, overall, the MEGABOOM’s sound is great!

The UE MEGABOOM retails for $300. It’s a bit on the pricy side. You can buy other speakers that have the same sound quality for less. But fortunately, it’s not the sound quality alone for why you would want to buy a MEGABOOM. It’s great design, 360 degree sound, waterproofing, and the ability to pair up to 49 other speakers result in an amazing package. If you can afford it, by all means, go ahead and buy it! You won’t be disappointed.