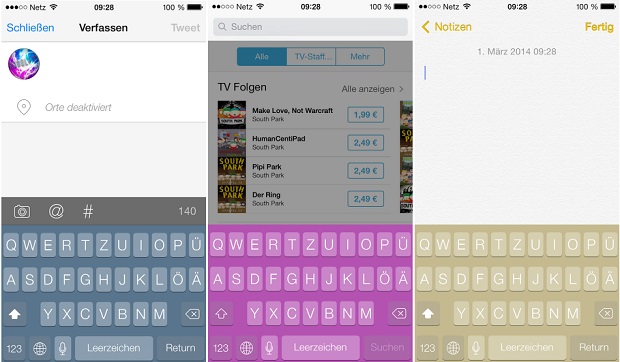 Colorizing the iOS 7 keyboard seems to be a favorite hack for jailbreak users. We have covered several tweaks in the past few months that allow users to change the look of their on-screen keyboard to any color of their choice.

Today we have another tweak to share with you called AdaptiveKeyboard, which does the same thing. This tweak kind of works in a similar way to ‘ColorBadges‘, which turns the color of notification badges in order to match the dominant color of the app’s icon.

AdaptiveKeyboard changes the color of iOS 7’s keyboard to match the dominant color of any app’s icon. This means you will see a different colored keyboard in each app, which will match with the overall look and feel of the app itself. Since most apps have icons that feature colors that are largely found in the user-interface, such as Facebook’s blue icon matches its top bar the keyboard will mostly match with the app’s tint.

Similarly for the notes application the keyboard will feature yellow color while on the App Store it will be colored blue.

AdaptiveKeyboard is a nice tweak that provides a fun way to type by replacing the “boring” and single colored keyboard of iOS. You can download this tweak from Cydia for $0.99. It is available under ModMyi repo.