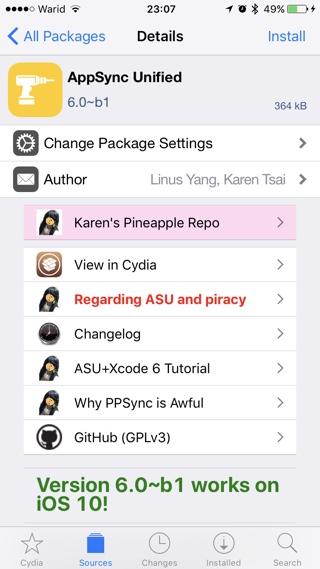 The popular AppSync tweak, which allows users to install unsigned IPAs for apps that includes the ones that are not available on the App Store has been updated. This means you will now be able to install applications that were not allowed in the App Store on your iOS 10 powered devices provided you have the app file (IPA) at hand. AppSync Unified is a pretty useful tweak that makes it possible for users to perform installation of unsigned IPA packages on jailbroken iPhone, iPad or iPod touch.

AppSync Unified not only provides general users a way to install apps that Apple rejected but also makes it possible for developers who are not enrolled in Apple’s paid iOS developer program to test and debug their apps on their own devices. While there are many positive uses for a tweak like AppSync Unified, there are some negative ones as well that give this tweak a bad name. Since you can install unsigned IPA packages with this hack, this means you can also install pirated copies of paid apps, which is both unethical and illegal.

While there are negative implications for AppSync Unified, its benefits arguably outweigh its disadvantages. The developer behind this tweak also stresses that AppSync Unified for iOS 10 should not be used for piracy purpose.

If interested you can download the AppSync Unified tweak from Cydia for free. Just add ‘https://cydia.angelxwind.net/’ to your Cydia sources. The tweak is in beta. [Reddit]