Thanks to the release of Pangu8 tool and Cydia’s support for iOS 8 many important jailbreak tweaks are already on their way to the latest available version of iOS. The developers of these tweaks that include the popular Activator, iFile, Eclipse and FlipSwitch have all either announced that they are working on iOS 8 versions or released betas. Some of them have also teased images of their hacks running on the operating system.

Ryan Petrich, who is one of the most active tweak developers has already made betas for Activator, FlipSwitch and AppList tweaks available for iOS 8. According to early impressions from the users who have already jailbroken their devices these tweak’s work as intended on their iPhones and iPads.

Similarly the developer of iFile app also revealed on Twitter that he is working on making it iOS 8 compatible. Here’s the tweet.

I haven’t been active for a couple of months, but I’m still alive. I’ve just started looking into making iFile compatible with iOS 8.

The developer of Eclipse, which brings a system wide dark mode to iOS also teased what appears to be the Settings page of Eclipse 2. He has yet to reveal the release date for the beta. 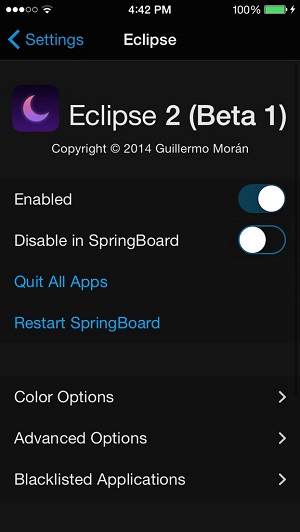 We will keep you updated as more tweaks are made compatible with iOS 8 jailbreak. In the meantime check out our list of tweaks that are already working with Pangu8 jailbreak here.