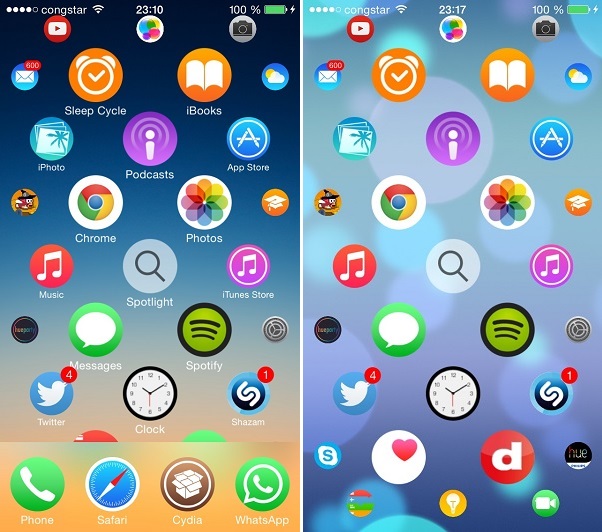 A new Cydia tweak called Aeternum adds the user-interface of the upcoming Apple Watch to iPhone and iPod touch. The tweak works on iPad as well according to its description page but has some glitches. While there are other tweaks that offer the same functionality to iOS users, what makes Aeternum stand out is the availability of additional customization options and features. Aeternum tweak integrates the spotlight search and the iOS dock with Apple Watch UI.

The tweak adds a spotlight button on the homescreen that you can tap in order to perform a quick search. You can rearrange icons according to your preference. The tweak also has a nice feature that makes it capable of rearranging the icons based on usage stats. So if you use an app more than others then that app’s icon will be made larger and placed at a prime location compared to the ones used less frequently.

If you are worried about excessive CPU usage due to animation of the icons then don’t as it only uses CPU when you are scrolling. Aeternum is fully theme-able, which means you will be able to apply themes to its icons.

If interested you can download this tweak from the BigBoss repo for $2.99. It works on iOS 8 and unofficially supports iOS 7 (has glitches).

PwnTunes for iOS 8 copies music to iPhone or iPad without iTunes
New in Cydia: DreamBoard, CSwitcher, CyDelete8, CCClockOpenToAlarm8 and more