Many smartphones feature optional vibration feedback for the keyboard that makes the device vibrate when a key is tapped. Apple devices, particularly the iPhone has never had this feature and most iPhone users don’t even miss having it. However if you have made the transition from Android to iOS you may miss the feeling you get typing on such a keyboard. Lucky for you as a new Cydia tweak called KeyboardVibrate8 adds this feature to the iPhone, making the device vibrate as a key is tapped.

There’s not much to this tweak apart from the one feature it brings to the iOS keyboard, which is a good thing. From settings you can increase or decrease the vibration time. There’s also a kill switch that lets you disable the tweak when you don’t need it.

With KeyboardVibrate8 the device only vibrates when it is set to the vibration mode. So if you have the ringer mode on your iPhone won’t vibrate, which is kind of annoying for people who would want their keyboard to vibrate while the device is still in vibration mode. 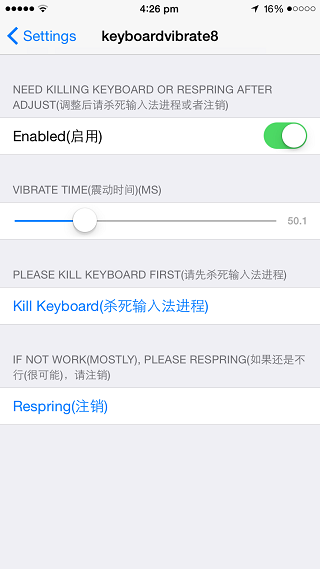 You can download KeyboardVibrate8 for your iPhone from Cydia where it is available for free. It is compatible with iOS 8.