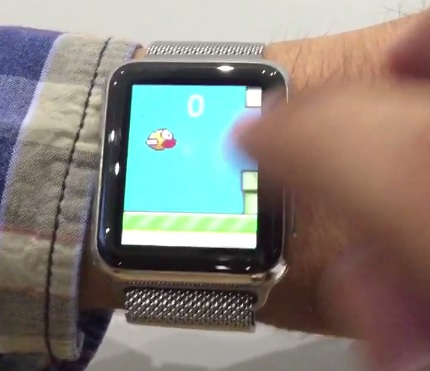 As we reported in an earlier article the watchOS 2, which was announced at the WWDC 2015 event allows developers to run applications on the Apple Watch natively but with limitations. Apple has not given developers access to UIKit and SpiritKit, both of which are essential of making apps capable of creating their own graphics. This hasn’t stopped iOS hackers from experimenting with the beta OS as previously a team of developers that included Steve Troughton-Smith, Saurik and Adam Bell were able to hack an Apple Watch to create graphics on it using the UIKit.

Now another developer named Hamza Sood has been able to run a clone of popular Flappy Bird game on his Watch. The developer was able to run the game natively using the SpiritKit rendering. While after watching the video it seems like a ridiculous idea to play the Flappy Bird game on such a tiny screen, the fact that Hamza was able to run the game on his Watch is quite amazing. As seen in the video he is able to control the game using the touchscreen as well as the digital crown.

To make sure people don’t confuse this port to be a WatchOS feature the developer clarified in a tweet that as of right now it is not possible to run such a game, and control it using touch or crown using the watchOS SDK.

Click to comment
iOS 9 code suggests iPad Pro could be released later this year
Beware: This iOS mail app bug can be used to steal your iCloud password