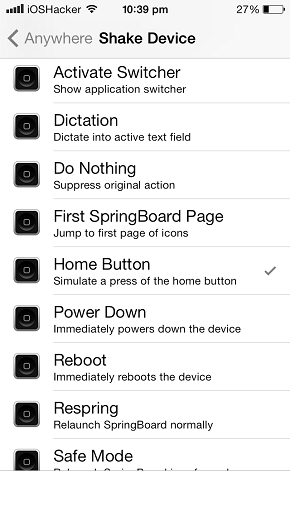 Popular Cydia tweak Activator has received an update, which makes it compatible with iOS 8.3. The beta version of the tweak is now available for download through developer Ryan Petrich’s beta repository. The news of Activator getting iOS 8.1.3 – iOS 8.3 jailbreak support is quite significant for the jailbreak community as not only it is a very useful hack but many other tweaks rely on it to function.

Most jailbreak users would have already heard about the Activator tweak, however if you’re new to jailbreaking then it is important that you know about it. Activator, which is developed by famed iOS hacker Ryan Petrich allows users to quickly perform certain tasks by performing different actions or gestures. Users get the ability to assign gestures to tasks as shortcuts, which they can perform whenever they want to perform a certain task on their device. This includes but is not limited to opening apps, launching Siri, changing brightness or other system settings and more.

If you want to download the Activator beta on your iOS device then add ‘http://rpetri.ch/repo’ to your Cydia sources by going to Source > Edit > Add. Once you have added the source you can download Activator for free. Bear in mind that this version might have bugs since it is still in beta.

Also, as Activator requires Cydia Substrate to work you will need to have the latest version of this Cydia component installed on your device. Details about how to install Cydia Substrate on iOS 8.3 can be found here.

Update: Activator with iOS 8.3 support has also been released on default Cydia repos.