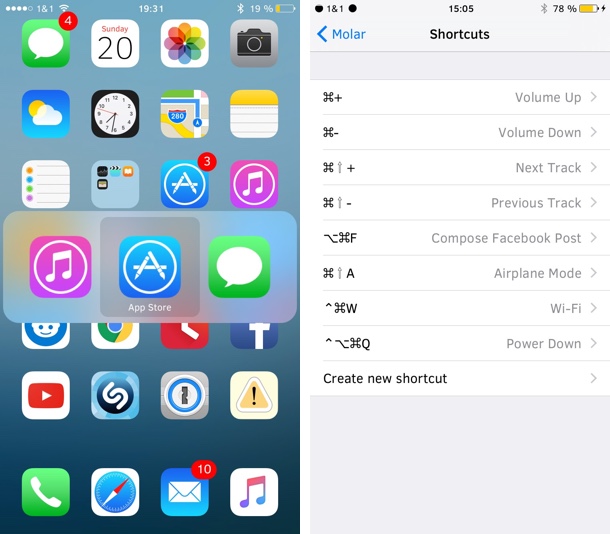 If you use a Bluetooth keyboard with your iPhone, then you should definitely check out the new Molar tweak for jailbroken devices. The newly released hack brings OS X-like shortcuts to iOS. In addition to adding the new keyboard shortcuts for iPhone, Molar also adds a new app switcher, which can be accessed by pressing the CMD + Tab buttons. With this new app switcher you can cycle through opened applications just like you can on a Mac or iPad. This app switcher is accessible in all parts of iOS including apps and homescreen.

That’s not all as you can also close the selected app and simulate home or power buttons with key combinations. Molar tweak also enables users to create custom key combinations and assign them to different Activator actions. With App Control feature the tweak makes it easier for users to select on-screen UI elements. All you have to do is use the tab and arrow keys to move the cursor around and select different buttons, tables, sliders, text fields, date pickers and more.

You can also press the arrow keys to scroll through the views. With Molar’s App Launcher feature you can set shortcuts to launch apps as well, for example you can press Cmd + 1 to launch Mail and Cmd + 0 keys to launch Music.

The developer has promised to add new features in the upcoming updates including ‘Key Sheet’, which will allow users to view all the shortcuts that work in an application by holding the Cmd key. Improvements for App Control are also promised.

You can download the Molar tweak from Cydia’s BigBoss repo for $1.99. It works with all devices running iOS 7 up until iOS 9.