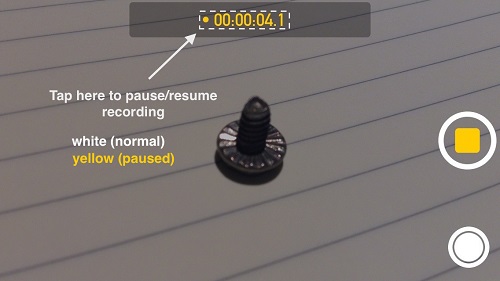 Anyone who uses his or her iPhone or iPad to record videos would know that you cannot pause in the camera app while you are recording. So if you want to have a video that is made up of different moments the only choice you have is to combine all the videos afterwards, which can be a bit frustrating. Fortunately for us, a new tweak called RecordPause by developer PoomSmart has been released that makes it possible for users of the stock Camera application to pause and then resume recording the same video on their jailbroken iOS devices.

The tweak adds a timer on the video recording screen that not only denotes the total recorded time for the video but also lets users pause recording when they tap on it. Once you have paused you can continue again by tapping on the timer once again. The time appears in white when the video is being recorded while it turns yellow when the process is paused.

According to RecordPause’s description users may experience “stutter bug” or frame skipping when they resume on a video if they have set the recording speed to 60 frames per second.

RecordPause brings a much needed feature to the stock Camera app and is a must have for all users. You can download RecordPause tweak from Cydia for free where it is available under the BigBoss repo. It requires iOS 8 to work.

Make life easier with TypeTab and AKMessages tweaks from Cydia
How to save iOS 8.1.x SHSH blobs using TinyUmbrella (guide)