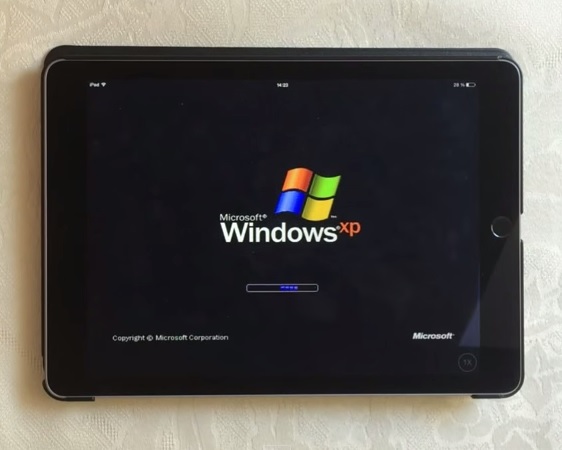 Previously we shared a video that showed Microsoft Windows 95 running on an iPad. Now a new video has been made by the same guy, who is back with his iPad that is running everyone’s favorite Windows XP. As noted in the video’s description the creator used a utility called BOCHS to achieve this feat. The operating version he was able to port was Windows XP Professional edition. The video embedded below gives a complete look at the working of the past’s most popular operating system on Apple’s tablet, right from the boot up.

Interestingly the user is able to use the touchscreen to control the cursor and move it by swiping on the screen. He can also make normal clicks by tapping on the screen. Although the movement of the cursor with slide gestures isn’t as smooth as it should be in the ideal conditions it is still usable. In the demonstration the user also shows the system properties of the device that show the general information about the software.

The port is not without any visible lag and admittedly you will get tired of using it on your iPad after a while. Despite all the lags and bugs this is a really cool thing to have and show off to friends.

The uploader ‘Hacking Jules’ says he will soon share the tutorial on how to install Windows XP on iPad so don’t forget to subscribe to his Youtube channel if you are interested in trying this out.

iOS 8.3 breaks Touch ID authentication in the App Store for many users
iOS 8.4 beta 2 and first public beta for iOS 8.4 out now