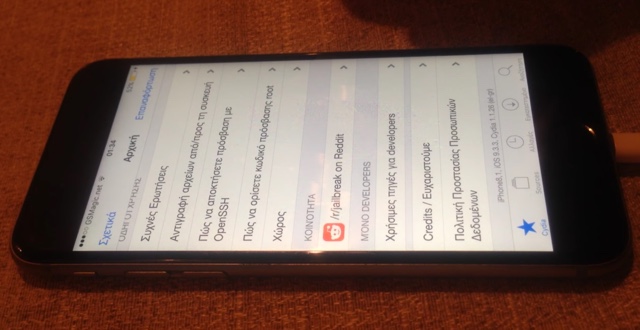 If you are getting tired of iOS 9 jailbreak news, then you are certainly not alone. We have been hearing so much news about the existence of iOS 9.3.2 and even iOS 9.3.3 jailbreaks but no news about their release. This might change as a Greek jailbreak team called GSMagic Team has surfaced on Youtube, with a video demo of an iOS 9.3.3 jailbreak. The video that is embedded below shows an iPhone 6s running iOS 9.3.3 beta and having Cydia installed.

The hacker in the video shows the iOS version running on the device and then launches Cydia’s main page to further confirm that the device is indeed running iOS 9.3.3. He then launches Cydia app MTerminal and enters some commands to show the app is working too. Perhaps more interestingly the video’s Youtube description tells the users to be “patient for public release”, indicating that the GSMagic Team has plans of publicly releasing a tool for iOS 9.3.3 jailbreak.

This is of course different from previous iOS 9.3.2 and iOS 9.3.3 jailbreak demos we have seen by hackers like Luca Todesco, who openly say that they are not going to release it for public use.

With a promise for the public release of the iOS 9.3.3 jailbreak we are looking forward to if and when this promise gets realized. Until then we are keeping our hopes on the lower side of the spectrum.