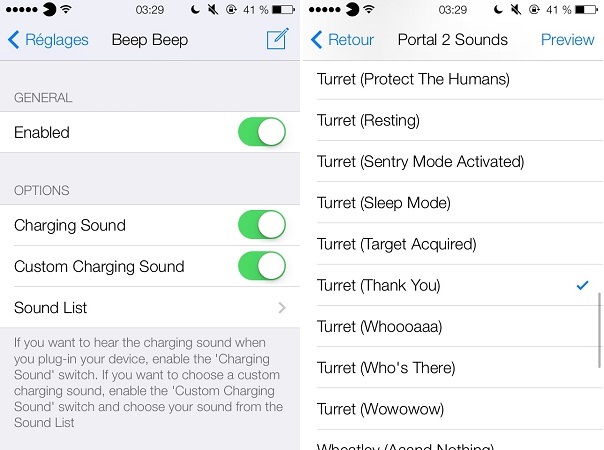 When you plug your iPhone or iPad into a charger it makes a distinct sound or if the device is in silent mode it vibrates twice. The display also lights up to let the user know charging has began. A new Cydia tweak called Beep Beep allows users to customize the way iOS devices behave when they are plugged into a charger. With this hack you can disable the charging sound, apply a custom sound from a variety of options, disable vibration as well as prevent the screen from turning on when you plug the cable into your device.

Beep Beep not only lets you change the plug in sound of iOS but it also brings a ton of alternatives that you can apply through the preferences. The tweak features 79 different sounds that you choose from with options ranging from sounds from popular games like Mario, Mortal Combat, Seinfeld, Final Fantasy and more. Other options include sounds from Pokemon and Portal 2. If you are worried about having to disable or changing the sound again and again when you restart the device then don’t as Beep Beep works even after you respring the iPhone.

Beep Beep tweak is now available in Cydia through the BigBoss repo, and it works on iOS 6, iOS 7 as well as iOS 8.