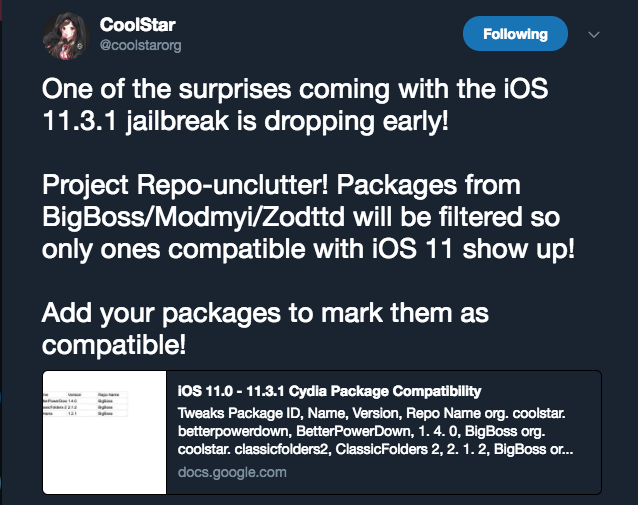 One of the biggest problems users face whenever a new jailbreak drops is finding tweaks that are compatible with their current iOS version. Cydia has thousands of packages that date back to the days of early iOS jailbreaking, so there’s a lot of clutter that can be especially confusing to new users.

Electra team member CoolStar, who is currently working on adding iOS 11.3.1 compatibility to his jailbreak tool has announced that upcoming Electra 11.3.1 will feature “Project Repo Unclutter”. This new feature will filter incompatible jailbreak tweaks and prevent them from showing up on user’s devices. The new jailbreak will filter default repositories such as BigBoss, ModMyi and ZodTTD and only show tweaks that are compatible with iOS 11.

Removing unsupported tweaks from Cydia will not only help in reducing clutter and make search faster, but will also help in reducing the chances of users losing their jailbreak, since installing incompatible tweak can result in an unstable jailbreak and force users to restore his or her device in order to restore normal functionality.