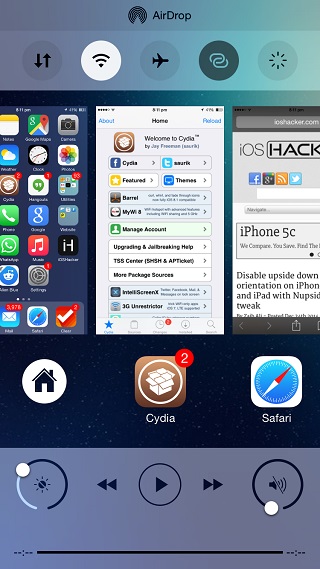 If you ask us then we would unhesitatingly say that Auxo is one of the best Cydia tweaks ever released. This awesome tweak merges the app switch and control center into a single experience, allowing user to toggle settings, switch apps and control music from a single interface. While these features are enough for a tweak to get into our good books, Auxo certainly doesn’t stop there as it offer a variety of other functions that make the life of iOS users a lot easier. Perhaps the best thing about Auxo is that it not only has really nice features but has been designed pretty well.

Today after much anticipation Auxo 3 got released in Cydia, which is the third major release of the tweak that has been around for 2 years. The update of course brings full support for iOS 8 and iPhone 6 devices. This release brings improvements for the features that were added in Auxo 2 and adds a few new ones as well . Most of the features as well as the design that was part of Auxo 2 has been brought forward to Auxo 3. This includes the three main features namely Multi-Center, Quick Switcher and Hot Corners. These are the main features that define the core working of the Auxo 3 tweak, and they haven’t changed much in this release. The update also brings landscape mode support for iPhone 6 Plus, which has been specifically designed for the bigger iPhone. 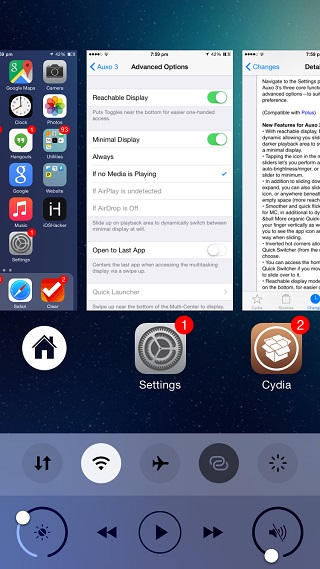 Multi-Center: Multi-Center merges the app switcher and Control Center features of iOS, enabling users to switch between apps and close them while being able to access toggles and music controls from a single screen. From Advanced Options you can configure Auxo to only show you the music controls when music is playing, more on this later. You can also slide up on the homescreen preview to close all the running applications. 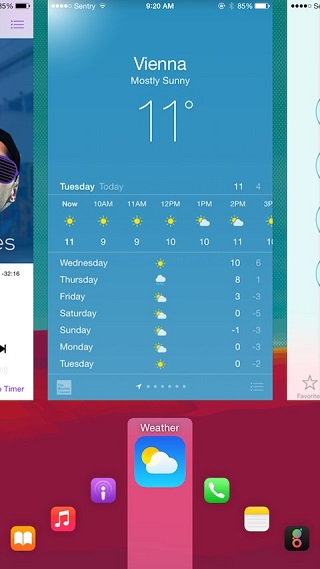 Quick Switcher: Quick Switcher as its name suggests is a feature of Auxo 3 that lets you quickly switch between apps by swiping your finger. To do so all you have to do is pull up from the bottom left corner of the screen and slide towards right. Once you have reached the app you want to launch simply release your finger.

Hot Corners: Hot corners make it easier for users to return to the homescreen by swiping up from the bottom right corner of their screen. This feature of Auxo 3 is similar to the popular Zephyr tweak of iOS 6 days.

Now that we have detailed the major functions of Auxo 3 lets talk about the minor ones. There are many new minor features that have been added in this release and using them could really enhance your experience. 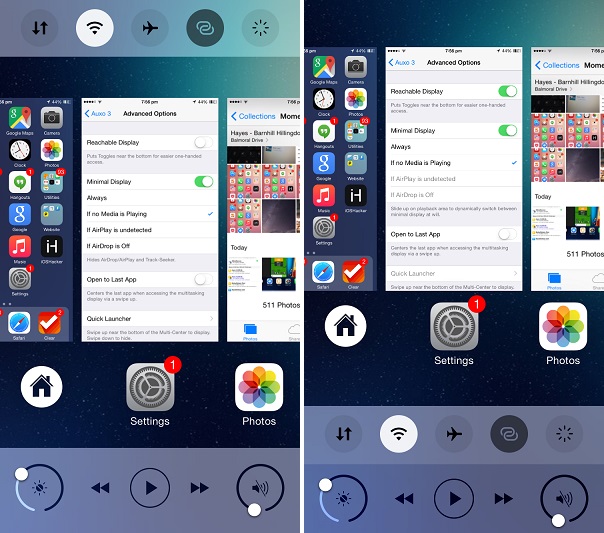 Reachable Display: In Auxo 2 the settings toggles were located on top of the screen. This wasn’t a problem for iPhone 5s users as their screen size was perfect for one-handed use. In iPhone 6 and iPhone 6 Plus however the case is completely different. To solve this problem Auxo 3 comes with the Reachable Display mode, which allows users to bring the toggles near the bottom of the screen, making it easier for them to access the buttons when using the device with one hand. 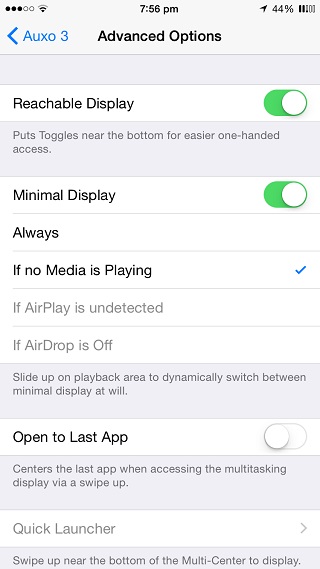 Minimal Display: The Minial Display feautre hides the AirDrop, AirPlay and Track-Seeker from the Auxo screen giving it a minimalistic look. You can enable this setting and configure it in such a way that the music controls and buttons only appear when media is playing, AirPlay button only appears when a device is detected and so on.

Open to Last App: This feature puts the last app you were using in the center so you can access it by simply swiping up and tapping on its preview.

Slider Actions: This option lets you turn on auto brightness or perform other actions by tapping on the button located inside the rounded sliders for brightness. Similarly the volume button inside the volume slider allows you to switch to ringer mode or jump to minimum or maximum volume levels. 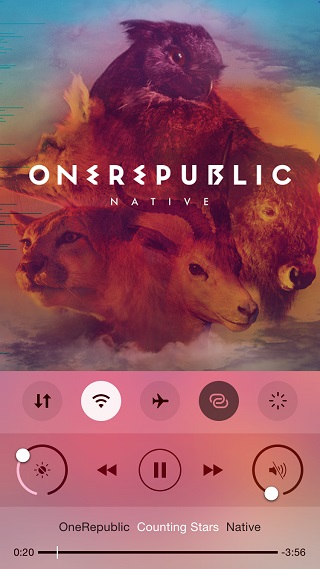 Album Artwork: With Album Artwork feature you can tap on the title of the now playing track to display album artwork of the song.

Along with the ones mentioned above there are several other options found within Advanced Options section of the Auxo 3 preferences page.

Overall Auxo 3 is a decent update that makes the Auxo 2 even better. You can download Auxo 3 on your jailbroken iOS 8 powered iPhone, iPad or iPod touch from Cydia for $2.99. If you already own a copy of Auxo 2 then the upgrade will cost you $0.99.