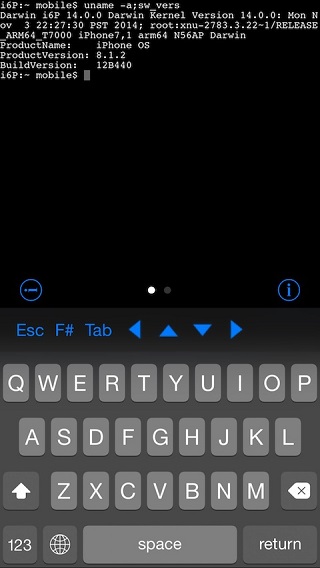 The Terminal app on OS X is a powerful tool that allows users to control and change different behaviors and settings of the operating system. Sadly there’s no Terminal app on either iPhone or iPad. However if you are jailbroken then the iOS Terminal app from Cydia can bring this missing application to your iOS device. While you won’t be able to perform all the functions with this app that you can with the Mac version, it does offer some useful functions.

With iOS Terminal app you can perform some basic system administration tasks that you cannot do on your iPhone, iPad or iPod touch normally. For example, you will be able to SSH into remote boxes, download files from different sources, edit configuration files and more.

The look of this app is very similar to the Mac version, which is kind of cool. The keyboard in iOS Terminal app comes with a dedicated bar for keys that are missing from the stock keyboard such as Esc, F#, Tab and arrow buttons for moving the pointer.

iOS Ternmial is a nice app that is both useful and fun to have. You can get it from Cydia’s BigBoss repo for free. It supports all iOS devices and iOS versions from iOS 5 up to iOS 8.