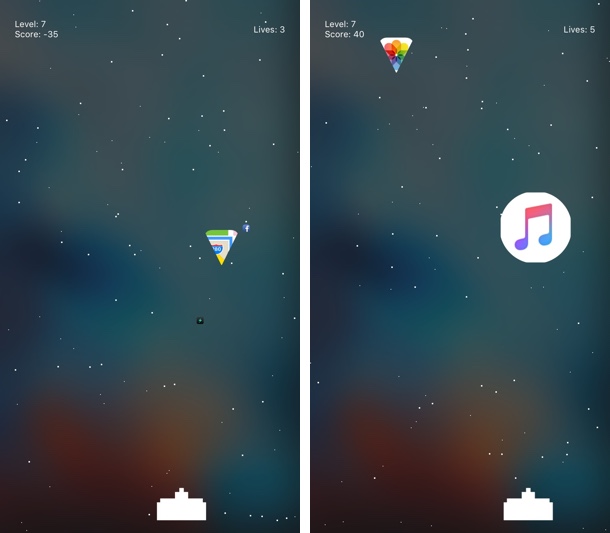 We have covered all sorts of fun tweaks on this website, however every now and then a new hack comes along that raises the bar of being useless yet a must have Cydia tweak. Introducing SpringInvaders, which as its name suggests puts the classic Space Invaders game on the iOS SpringBoard. What makes SpringInvaders even more fun is the fact that it not only turns homescreen icons as enemy invaders but also as springship’s ammunition. Once the game is launched through an activation method, you can control the ship by tilting the iOS device in either direction.

To shoot all you have to do is single tap on the screen when the ship is in the right position. You can also use the ‘springbombs’ by tapping and holding on the screen for a second. SpringInvaders is a full-fledge game that has levels, shows your current score, and number of remaining lives. You can launch the game by performing a custom Activation method that can be reconfigured from settings. You can also configure tilt sensitivity, specify the starting level and more.

If you have a jailbroken iPhone, iPad or iPod touch running iOS 9 or iOS 8, then you can download SpringInvaders tweak from Cydia for $o.99.