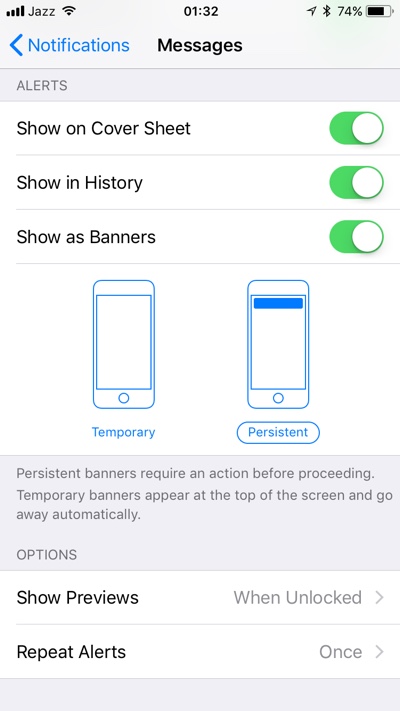 iOS banner alerts have kept a pretty typical behavior ever since they were introduce on iOS 7. iOS 11 brings a significant change to how they behave by adding new options in the Notification settings. We have already talked about the new iOS 11 feature that gives users control over when the message previews should be shown and when they should be hidden on per app basis.

Another banner notification related option introduced in iOS 11 is called the Persistent option. This option can be configured individually for each stock and third-party app, so you can have different settings for different apps, which is a good thing.

What Persistent option does is it will keep the banner alert on screen until the user interacts with it. Previously on versions iOS 10 or earlier the banner alert goes away automatically after a few seconds. While this was an acceptable behavior it can be problematic occasionally, when the user is not looking at the screen, as he or she would not know about the notification.

When Persistent option is selected notification banner will stay on the screen until user either taps on it to open the app it belongs to or swipes up to dismiss it.

Persistent option is not for everyone and is certainly not for every app. However the good thing is you can enable it for certain apps that you consider important, such as the Messages app or any other app of your choice.

If you want the banners to disappear automatically after they show up on your device, you can choose the default Temporary option.