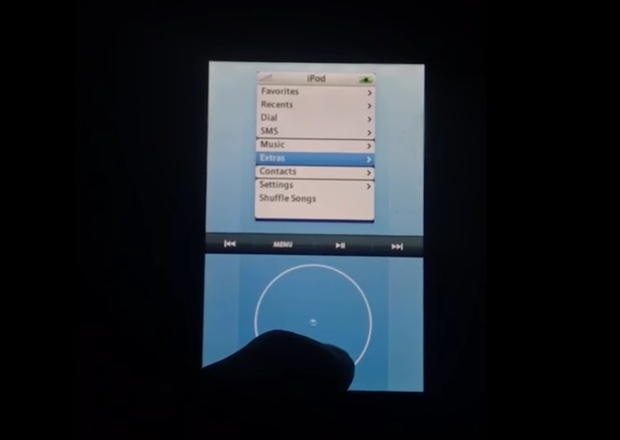 If you are familiar with iPhone’s history, then you might have heard that Steve Jobs when creating the iPhone had a little competition going between the iPod and OS X teams. Apple asked the iPod team lead by Tony Fadell to expand the OS that powers iPods to include features necessary for mostly probably a click-wheel powered phone. Similarly the legendary CEO asked the OS X team lead by Scott Forstall to strip down the desktop operating system for a touchscreen smartphone.

Until now the ‘iPod-Phone’ only existed in our imaginations, however now an early prototype has been shared online that gives us a look at the concept that was developed by Tony Fadell (commonly known as the ‘father’ of iPod) and thank goodness Apple did not go through with it. The prototype shows the user-interface of the iPod-Phone OS that was called Acorn OS during the prototype stage. It features UI design that is same as the iPod operating system and has menu items like Dial, SMS and other phone related items not found on iPods at the time.

The menu items as well as the dial screen was navigated using the familiar circling gesture of the click-wheel. To open a menu item users simply needed to click on the center button. While the video shows a on-screen click-wheel we suspect that this has been simulated and is not from the original iPod-Phone OS concept. The original concept would have featured a physical click-wheel, which makes sense after looking at the menus shown.

We can only imagine how different the world of smartphones and the technology world as a whole would have been if Apple had gone with the iPod-Phone concept instead of choosing to create the iPhone as we know it today.