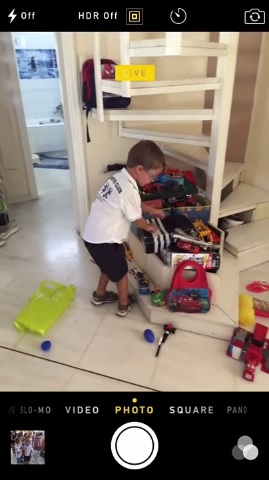 Yesterday we told you about developer Elias Limneos’ plans of bringing 3D Touch like shortcuts to homescreens of older devices. While that was an impressive feat it seems like Limneos isn’t done impressing us. Today, he has revealed plans of creating a new Cydia tweak that will bring iPhone 6s’ Live Photos features to older devices. He has even shared a video of his tweak working on an older devices. In the video embedded below, we can see that his implementation is very close to the real Live Photos feature, which is limited to the latest iPhone 6s and 6s Plus only.

For those of you who are not familiar with the new Live Photos feature of iPhone 6s, it is a function that when turned on through the Camera app, records before and after moments of a photo. User can then watch these moments when viewing a still photo by force pressing on the preview screen. These images are like portraits we saw in Harry Potter movies, briefly showing the scene in the photo in action.

Elias Limneos has not released any details about the release of his Live Photos tweak for iOS 8, however based on the video he has shared on his channel it seems like he is nearly done.

We will let you know as soon as this tweak is released in Cydia.