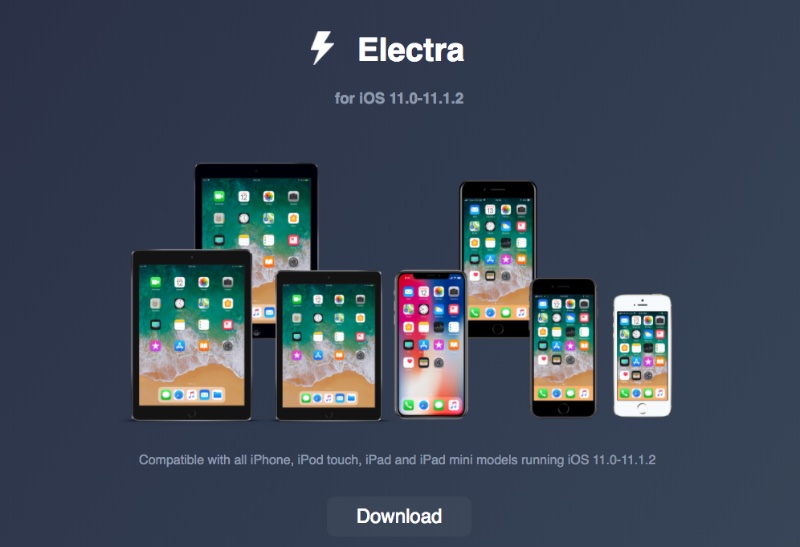 iOS hacker CoolStar has released his Electra Jailbreak tool that is capable of jailbreaking all models of iPhone, iPad and iPod touch running iOS 11.0 all the way up to iOS 11.1.2. Even though the Electra Tool is available for download, bare in mind that it is in beta and is intended for tweak developers and theme creators for now. A public version of the tool will be released at a later time.

Just like the LiberiOS tool for iOS 11, Electra jailbreak also does not install Cydia. In fact once you have jailbroken your device you have to install tweaks and other stuff using SSH, which means those who don’t know what they are doing should stay away from using this tool. Cydia will be added along with other stuff to make the jailbreak suitable for public release once Saurik has updated Cydia for iOS 11.

If you are a developer or a power user who knows what they are doing, you can install tweaks to your iOS device at /bootstrap/Library/SBInject using SSH while themes can be installed at /bootstrap/Library/Themes. More details about the jailbreak tool are available on the Electra Jailbreak’s website.

Electra is a tool designed for developers and themers. If you do not know how to use SSH, please don’t use this tool and wait for a later release. Although Electra itself should be safe, we are not responsible for any damage that may be caused to your iOS installation by any tweaks or executables you load after the jailbreak.

Is There A Jailbreak For iOS 11.2.2? Current State Of iOS Hacking
Toyota Announces Plans To Finally Embrace Apple CarPlay, Starting With Avalon 2019