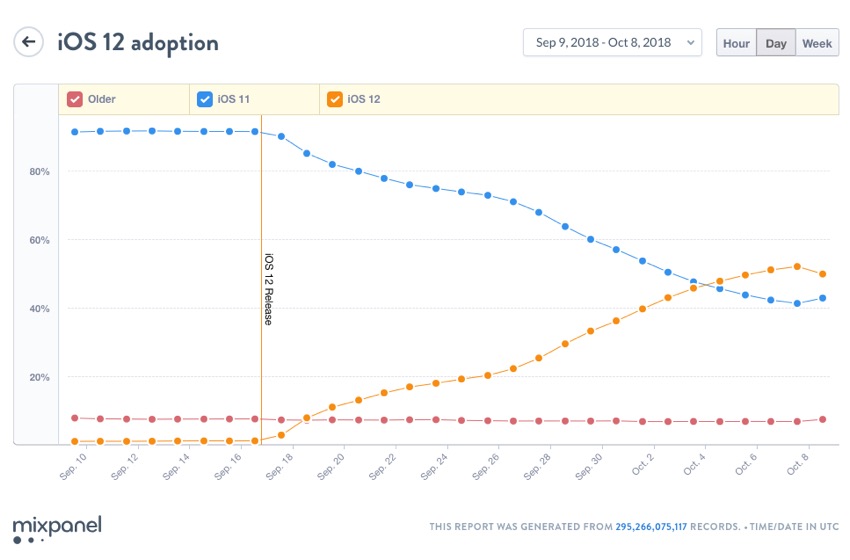 iOS 12 has been one of the smoothest and mostly bug-free major iOS release of the past few years. The update not only brings tons of improvements to the operating system for all devices but also improves performance on older models. Perhaps this is the reason why iOS 12 adoption has been off the charts and has even outpaced last year’s iOS 11 version.

According to data shared by Mixpanel iOS 12 now powers over 50% of active iPhones, iPads and iPod touches. iOS 12 has been able to achieve this impressive figure in under 20 days from its release, whereas it took iOS 11 a month to reach the same milestone.

Although iOS users are generally more receptive when it comes to installing software updates this year’s fast growth appears to be the result of the focus Apple had placed on making iOS 12 more stable and improving performance. The software update has brought positive results even for iPhone 5S users as they are reporting performance improvements on their more than 5 years old device.

As data from Mixpanel comes from a third-party source we will wait for Apple to announce its official figures, which are supposed to be more accurate and precise. Historically data from third-party sources that gather their data from web and mobile app analytics reports higher numbers than the one Apple reports based on the App Store usage.

Have you upgraded your iPhone, iPad or iPod touch to iOS 12? Let us know in the comments section below.