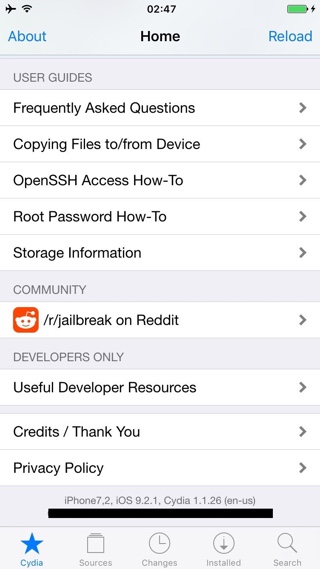 Its been months since the release of previous iOS 9 jailbreak and still there are no reports of its imminent release. While iOS 9.2.1 is currently under beta, a well known iOS hacker named Luca Todesco has shared on Twitter that he has been able to achieve the iOS 9.2.1 jailbreak and is running it on his iPhone 6. To back his claim Luca has shared a screenshot of Cydia that clearly shows “iPhone7,2 iOS 9.2.1, Cydia 1.1.26”, suggesting that Cydia is indeed running on an iOS 9.2.1 powered device.

While Luca’s announcement is exciting he has also killed the buzz by mentioning in his tweet that there will be no releases for iOS 9.2.1 by him. While this comes as a sad news for users who have been waiting for the jailbreak’s release, it also serves as a consolation knowing a jailbreak is still possible for the latest (yet unreleased) version of iOS and can be released by another team, namely Pangu or TaiG.

This is not the only jailbreak related news we have heard in past few weeks, as recently TaiG team’s partner 3K Assistant also claimed that a jailbreak will be released soon for iOS 9.2, a statement that they later pulled from their social media account.