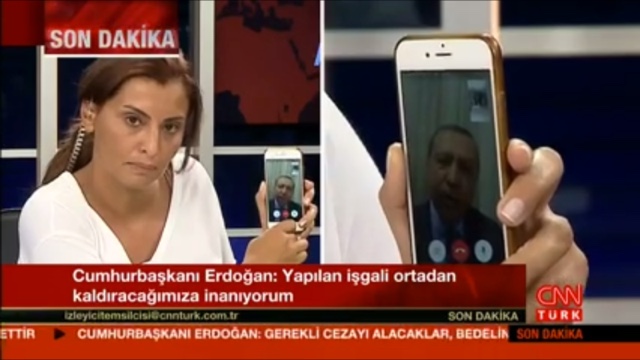 Turkey is going through an attempted coup right now and there is chaos everywhere. Country’s President Recep Tayyip Erdogan, who is considered to be the most powerful figure in his country was out of the capital during this event. To communicate with his people and give an interview to CNN Turkey the President (or the former President depending on how the events unfold in that country) used Apple’s Facetime video calling service. The President appeared on air through Facetime with the TV host holding the phone in an awkward position, so the viewers could see the leader speak.

While the video call ran quite smoothly for the most part there were some connection errors that interrupted the super important address by the Turkish President at this critical time. In his Facetime address Erdogan reportedly told the public to come out to public squares and airports and take control. This is of course in retaliation to the military coup who have begin taking over public infrastructure and have already made the state television to go off-air.

While these are tough times for Turkey and we wish no one gets hurt, it is truly fascinating and ironic to see how services like Facetime, Twitter and Facebook are playing such an important role where governments, who are usually seen blocking them have to rely on them in order to reach the public. Other government officials such as former President Abdullah Gul have also reportedly used Facetime to give an interview.

P.s The Youtube video’s title above says the call happened on Skype, which is incorrect. The call was made through Facetime as seen through the interface.