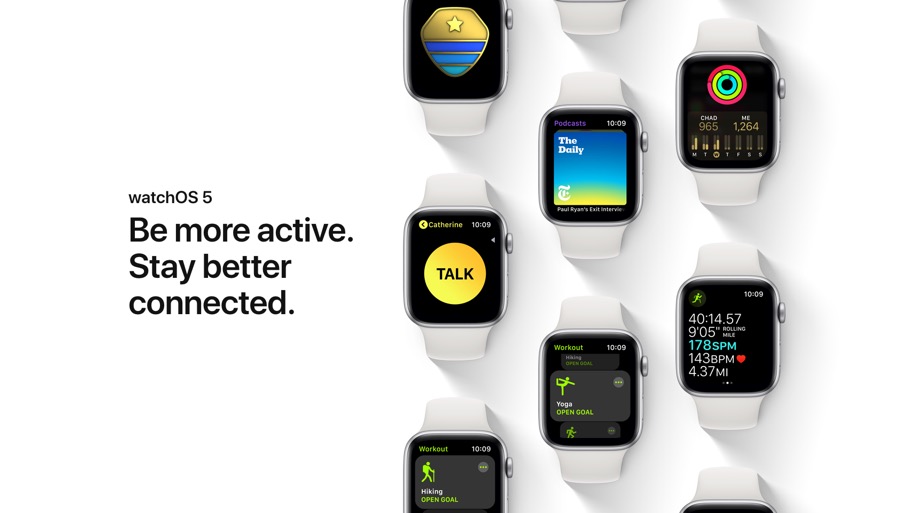 Along side iOS 12.0, Apple has also released watchOS 5 software update for Apple Watch and it is now available for download. The major software release brings a number of new features and improvements to the Watch and is recommended for all devices.

With watchOS 5 Apple is bringing Podcasts app to the Watch, new Walkie-Talkie app that will allow users to communicate with other Watch friends, new element and Breath watch faces and more. The update will also bring ‘Activity Competitions’ that will allow users to compete in activity challenges against their friends. Workouts app has also received new features including ability to auto-detect workouts, a new Yoga workout, Hiking workout, pace alerts and more. Siri Watch Face has been improved to give better proactive suggestions and shortcuts to the user. The personal assistant will also be able to perform actions in third-party apps and does not require user to say ‘Hey Siri’ before they could take to it, just raise your wrist and start talking. watchOS 5 also brings improved notifications and student IDs.

You can update to watchOS 5 by opening Watch on your iPhone and from ‘My Watch’ tab. Then scroll down and tap on ‘General’. Finally tap on ‘Software Update’ to download and install the update on your device. It is a good idea to put your Apple Watch on charge while downloading the update.

Click to comment
Differences Between Apple Watch Series 4 Models
iOS 12.1 Developer Beta Is Now Available Along With watchOS 5.1 And tvOS 12.1