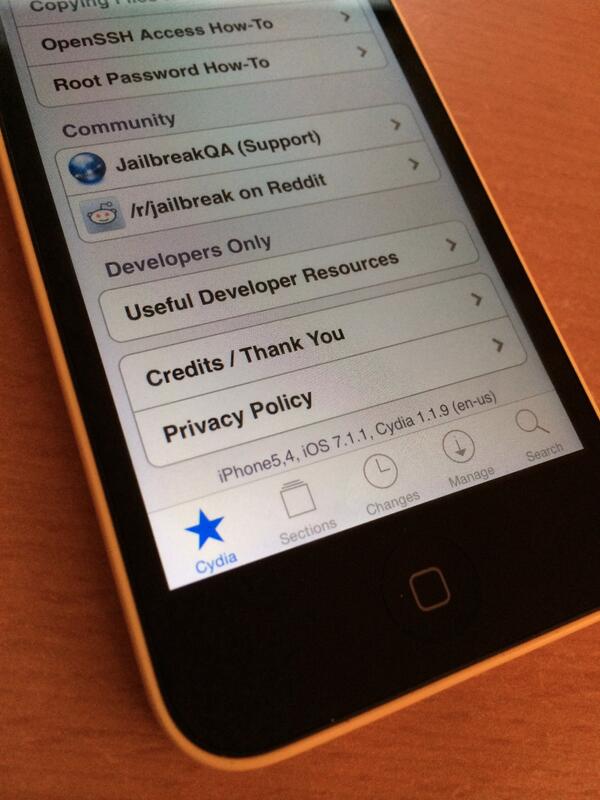 It seems like iOS 7.1.1 has finally been jailbroken as infamous iOS Hacker Stefan Esser has shared a photo of his iPhone 5c running Cydia on this version of the operating system. The device is shown running the main page of Cydia complete with information about the iPhone model, iOS version and Cydia’s build number. As clearly visible in the image above Cydia 1.1.9 is working on iPhone 5c running iOS 7.1.1.

@i0n1c has also shared a few details about the exploit he has used. According to one of his tweets the iOS 7.1.1 jailbreak does not uses the long vulnerability chain, instead it uses what he calls the “single beautiful kernel bug”.

While we believe that Stefan has successfully jailbroken the iOS 7.1.1, we do not believe that he plans to release it for the public. In the past he has publicly criticized the commercial aspect of the evasi0n jailbreak and has distanced himself from the whole jailbreak scene.

That iOS 7.1.1 jailbreak is not based on a long vulnerability chain. It uses a single beautiful kernel bug that goes from mobile to kernel.

Since iOS 7.1.1 has been jailbroken it is obvious that the same is true for iOS 7.1. With iOS 8 beta couple of months away hackers may decide not to release the jailbreak until the next few months, however nothing can be said with certainty at this point.

GBA4iOS receives a DMCA notice from Nintendo, is no longer available for download
Hacker i0n1c demonstrates his Cyberelevat0r iOS 7.1.1 jailbreak on video