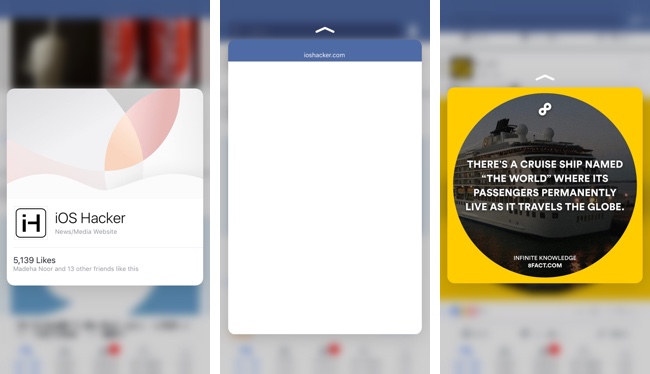 Nearly six months after the release of first 3D Touch based iPhone, Facebook has released an update to its official app for iPhone to add support for 3D Touch. The official app now allows users to peek and pop on different parts of the social network. If you have an iPhone 6s or iPhone 6s Plus, then you can now head to the App Store in order to update to the latest version of Facebook. Facebook has added extensive support for 3D Touch in its app, as it now allows users to quickly preview a profile, external link or an image with the help of pressure tap.

Just like other apps users can pop by pressing harder in order to view the full version of the page. For profiles Facebook shows the cover photo, profile photo and employment details of the users in the peek view. For pages it will show the cover photo, profile picture and number of likes. For links Facebook will load the webpage, letting users view whats on it without leaving the current page.  Similarly you can preview images by pressure tapping on them.

You can download the Facebook app for free, or head to the App Store on your iPhone to update to the latest version.