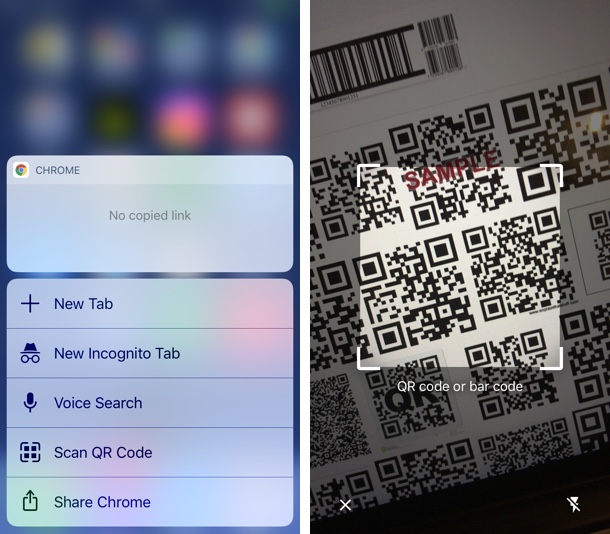 iPhones don’t come with a built-in QR code reader. While that’s not an issue most of the time, it can be real problem when you really have to scan a QR code to access a web page. What many users don’t know is Google’s Chrome browser for iOS features a built-in QR code scanner that can read any QR code out there. The best thing about Chrome’s QR code scanner feature is that it will quickly launch the matching web page as soon as you scan a code.

In the most recent Chrome update Google has added the QR code shortcut to the 3D Touch shortcut that you can access by long pressing on the homescreen icon. Once you select the shortcut from the menu the QR scanner is launched directly allowing you to quickly scan any code that is in front of you using the back camera. On older devices users can go to the Spotlight search and type ‘Scan QR Code’ and launch the first result to access the scanner feature.

QR Code button not showing up in 3D Touch menu? After updating Chrome you might not see the ‘Scan QR Code’ button in the 3D Touch menu. If that happens just open Spotlight search and type Scan QR Code, and tap on the first result. When the Chrome launches, return to the homescreen and try again. You should now see the scanner button.