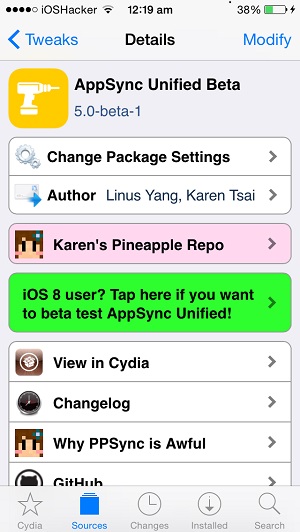 AppSync Unified tweak for jailbroken iOS 8 devices has been released and it is now available for download in Cydia. The tweak has been developed and released as a beta by tweak developer Karen Tsai. The new version of the AppSync Unified has been rewritten to fully run on iOS 8 powered iPhone, iPad and iPod touch. While we do not support app or tweak piracy in any form and AppSync has traditionally been widely known as a tweak for pirating apps, it is important to note that there are many positive uses of this hack that make it super useful.

Many app developers who do not have Apple’s Developer account can test their apps on their iPhone or iPad thanks to this tweak. It also allows normal users to install unsigned apps that have been pulled from the App Store by Apple. So if you are someone who does not download pirated apps and would love to get this tweak to run your favorite apps such as GBA4iOS and many more on your device then now you can.

If you are interested in downloading AppSync Unified Beta 5.0 on your jailbroken iOS device then add Karen’s repo http://cydia.angelxwind.net/beta/ to your sources. It is available as a free download. (Reddit)