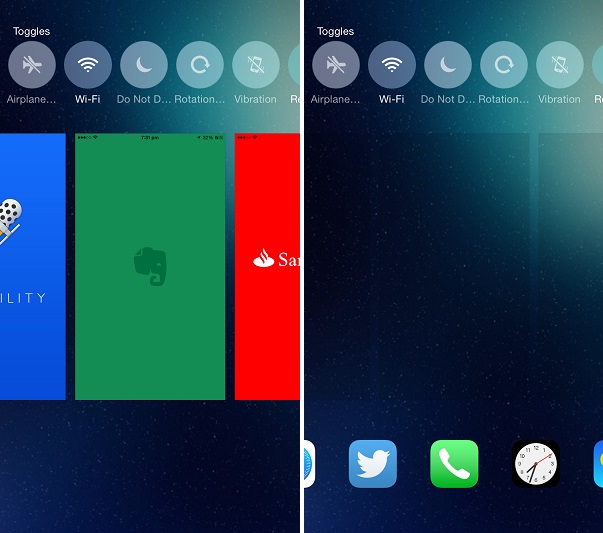 iOS 7 brought a significant redesign for the App Switcher that was a lot different than what it used to be in previous versions of iOS. Then came iOS 8, which kept the same design while adding recent and favorite contact buttons on the top side. Even though this page, that is the center of multitasking in iOS has changed a lot its most recent major redesign came more than a year ago. If you have grown bored with the way it looks and are not interested in trying something as ambitious as Auxo, then SimpleSwitcher is a tweak you should try.

With SimpleSwitcher you can add minimalism to your app switcher by changing certain aspects of its elements. For example, with this tweak you can make the app preview cards show the launch page of each app. This looks really nice when apps actually have a splash page, which sadly is not very common in third-party and even stock iOS apps. If you want to go for super minimalism then you can even make the app preview cards completely transparent. Of course in this case you shouldn’t use the icon hiding feature of this tweak in order to see which app’s card you are tapping on.

In addition to the features mentioned above you can also remove app icons from app switcher, remove icon labels and disable the landscape mode of the switcher.

SimpleSwitcher is a nice tweak that does what it is intended to do. You can download it from Cydia for free. It is compatible with both iOS 7 and iOS 8 powered devices.

Click to comment
Supercharge your iPhone keyboard with iKeywi 3 tweak
Confero puts apps with notifications in a folder, accessible through status bar