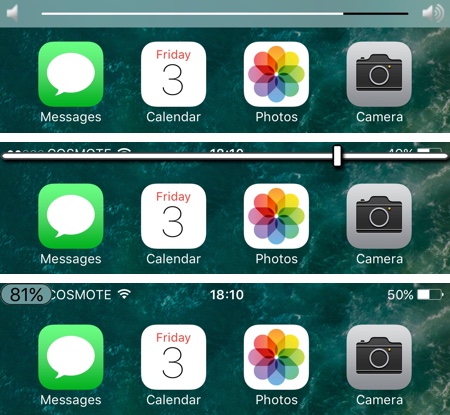 In its bid to make both macOS and iOS look similar, Apple has kept the big and ugly VolumeHUD on iPhone since the first version of iOS. The VolumeHUD, which appears when you press the volume buttons to adjust the device’s volume covers a significant part of the screen hiding what’s behind it. If you want to replace the VolumeHUD with something less obnoxious than try out the ByeByeHUD tweak from Cydia. This tweak replaces the stock VolumeHUD with minimalistic volume indicators.

ByeByeHUD even offers some customization options, enabling users to choose between three different themes. These themes that are shown in the image above include The Bar View, The Slider View and The Minimal View. There are no complicated settings to configure, just install the tweak and choose the theme you want. Once installed and enabled the tweak will display the current volume level whenever you adjust it using the volume buttons. The Minimal View theme will show the percentage of the current volume while the other two will show progress bar like sliders.

You can download the ByeByeHUD tweak on a jailbroken iOS device running iOS 10, iOS 9 and iOS 8. It is available for free under the BigBoss repository.