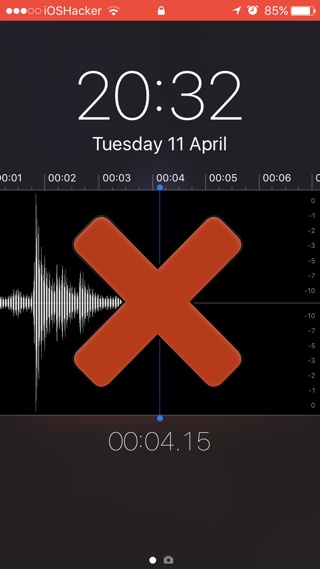 The stock Voice Memos app on iPhone allows users to record audio on their iPhone. While the app does a decent job at recording audio, it has a major quirk that makes it hard to record audio discreetly. Whenever you hit the record button and exit the Voice Memos app a red bar is shown at the top to indicate the app is recording in the background, which is not ideal especially when user wants to record discreetly.

Even when you lock the iPhone, the app displays a waveform on the lockscreen that clearly indicates audio recording is in progress. The new discreetVoiceMemos tweak from Cydia solves this problem by simply disabling the two major annoyances of the Voice Memos app. After installing the tweak you will be able to record voice memos or someone else discreetly as a red bar won’t appear when sound recording is in progress. The hack also disables the lockscreen waveform so even when the iPhone is locked no one can tell it is currently recording.

You can download the discreetVoiceMemos tweak from Cydia, where it is available for free. It works with iOS 8, 9 and iOS 10.