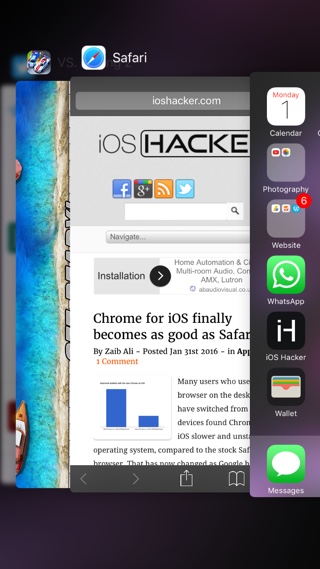 iPhone 6s and 6s Plus both have 3D touch, which brings a plethora of new gestures. One of the useful gestures introduced in the latest iPhone gives users the ability to access the app switcher or the multitasking screen by swiping right from the left edge of the screen. Users have to press hard while swiping to access the app switcher as it is a 3D touch gesture, which makes it a little hard to do especially when you have a protective case or screen protector on. If you want to make use of this gesture then we have got an arguably better way of doing so.

On your iPhone 6s or iPhone 6s Plus you can force tap on left edge of the screen in order to launch the app switcher as opposed to swiping towards the right side. Upon doing so iOS will launch the App Switcher, letting you switch to another app conveniently. Just like any other 3D Touch gesture you will see the app switcher animation as you press.

Many users will not only find this method easier but it can also proved to be faster, especially if you find performing the force swipe gesture tricky.