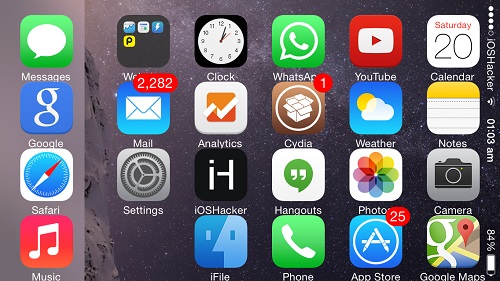 Apart from its giant screen iPhone 6 Plus comes with a few exclusive features that set it apart from other iPhone models. One such feature is its rotation feature that not only rotates the app icons on the homescreen but also changes the orientation of several stock applications to better take advantage of the larger real estate. While the rotation feature is limited to iPhone 6 Plus only you can get it on the homescreen of your older iOS device with the help of a tweak called IconRotator.

Interestingly the IconRotator tweak was released by Ryan Petrich for iOS 5 and hasn’t been updated to support later versions of iOS. However it has recently been discovered that the tweak works pretty nicely on new software versions including iOS 7.x.x. This allows jailbroken iOS users to have the new iPhone’s rotation feature, at least on the homescreen.

As of right now you cannot download IconRotator from the App Store as it does not officially supports iOS 7. You will get compatibility error even though the tweak works fine on the newer version. Until that changes, to get the tweak you need to follow the steps below.

That’s it! Now you know how to get that fancy iPhone 6 Plus feature on your iPhone 5s or iPhone 5’s homescreen. Of course its not perfect but still its cool enough to have. Also, you can make the appearance better by changing the size of icons or hiding labels using different tweaks.

Continue Reading
You may also like...
Related Topics:Cydia, Free, How to, IconRotator, iFile, iOS 7 tweaks, iPhone 6 Plus, Ryan Petrich, tweaks