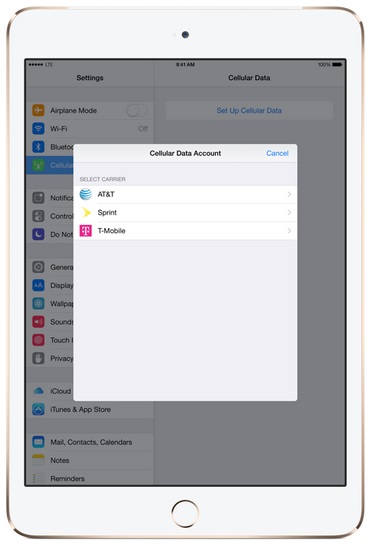 At the October 16th event Apple took the stage to unveil the new iPad Air 2 and iPad mini 3. The company detailed the features of the new tablets along with some other products that were announced that day. However, one thing that wasn’t mentioned during the keynote and is buried deep the product page of the new iPad Air is a new thing called Apple SIM. This new SIM by Apple, which company chose not to promote at its event can cause major disruption in the world of carriers.

So what is Apple SIM? Well according to Apple’s website it is essentially a SIM card that will come pre-installed on the new iPad Air 2 and iPad mini 3. This special SIM will allow users of the tablet to switch between carriers right from Settings app’s Cellular page and buy short-term plans from carriers rather than getting 12 or 24 months long contracts. This means you can simply switch between carriers and have no long-term commitments with them, and do all this using a single SIM card.

Right now, Apple SIM is only available in the US and UK. In the US you can use it on AT&T, Sprint and T-Mobile while in the UK it supports EE at this moment. More carriers and countries are expected to join this list in the coming months.

Based on what it actually allows users to do the new Apple SIM feature in the new iPads is a major game changer for the cellular industry, and gives more control to Apple and the users rather than the carriers.

Things will get even more interesting once this SIM is included with the iPhones, which is safe to say is a carrier’s worst nightmare.