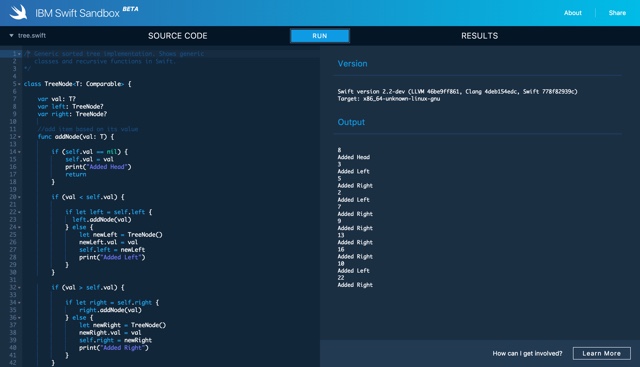 In case you missed the news yesterday, Apple’s Swift is now open source. Following this major development IBM has released a new Swift Sandbox tool, which allows users to write and run Swift code in any web browser, on any operating system. This is a great news for those who want to learn the programming language and develop programs using it. The web app developed by IBM has Linux server based backend. Just like any other online programming tool, you can type the source code on one side of the screen and get the results on the other.

The IBM Swift Sandbox web app supports standard library functions alongside the core Swift language, which means you can write formula based math problems in the console and get instant results as the output. All the processing is done over the cloud, so it does not matter if you are on a mobile device, Windows PC or any other device that does not run Swift. While we don’t see any serious developer using this web tool for app development, it is a great site to see the Swift language in action. Especially if you are someone who is learning how to program in Swift, it can be more than helpful.

You can access the Swift Sandbox app here. (IBM)

Tim Cook: Apple has no plans of merging iPad with the Mac
iOS 9.2 for iPhone, iPad and iPod touch released, get direct download links