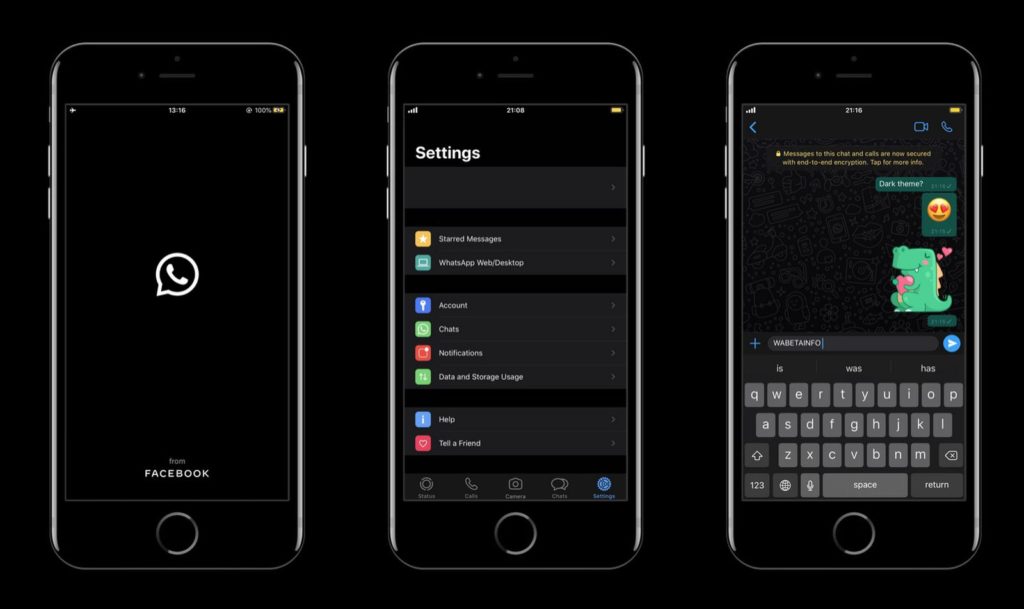 Even though iOS already has a system wide dark mode for several months, many apps have yet to support it. One of the most popular apps that still lack dark mode feature is WhatsApp. WhatsApp users have been asking for a dark mode even before Apple added it in iOS 13, however now it looks like their prayers are finally going to get answered.

Following up on our initial report in which we told you about WhatsApp testing a dark mode on iPhone and Android apps, we now have screenshots that show us how WhatsApp dark mode will look like on iPhone. The screenshots come from WhatsApp’s official beta build that is under testing through the TestFlight app.

Currently WhatsApp beta is at 2.20.30.25 build and features a dark mode that can be seen on the launch splash screen, settings screen, chat screen, home screen menus, status screens and more. On the chat screen the chat bubbles and the background also appear dark.

The screenshots above have been shared by WABetaInfo (via), which reports that WhatsApp has followed Apple’s guidelines on implementing the dark mode, which works in harmony with the iOS 13’s system wide dark mode features. This means you will not have to manually enable or disable dark mode setting in WhatsApp, as the app will respect your iPhone’s system settings and will automatically switch to dark theme if your iPhone’s dark mode is enabled. It will go back to light theme if the system wide dark mode is disabled. This also means that iOS 13 will be required for the dark mode feature to be functional.

With WhatsApp currently testing the dark mode feature with beta testers we expect the feature to roll out for public in an upcoming app update, provided everything goes according to developer’s plans.