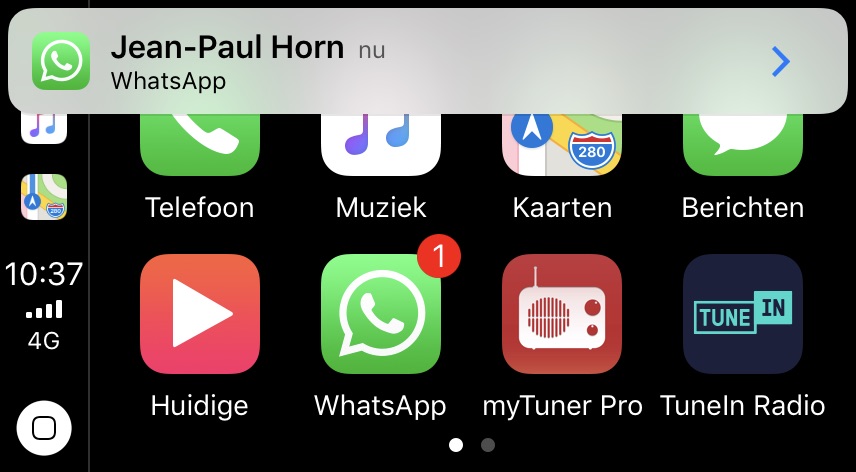 WhatsApp Messenger app for iOS has received a major update in the App Store, which finally brings Apple CarPlay support to the messaging application. This will make it possible for users to receive WhatsApp push notifications on their car’s in-vehicle connectivity system.

After updating to the latest version of WhatsApp (2.18.20) users will see the WhatApp icon on the CarPlay homescreen. Now users will be able to get notifications and have Siri to read them out loud. In addition to that users will also be able to send messages by specifying the user and dictating the message through Siri.

While WhatsApp is now offering many features that have been available to users on the stock Messages app for CarPlay, one noticeable difference between the two apps is that right now users cannot browse through the list of conversations in WhatsApp for CarPlay.

WhatsApp is the first major messaging app to support Apple CarPlay. Most developers have yet to add support for CarPlay to their application and until now most of the apps that we have seen getting released for the in-vehicle communication system have been audio apps like Spotify, Overcast etc. Hopefully WhatsApp integration will encourage more developers to bring CarPlay support to their apps.

If you are not using it already, you can download WhatsApp for free. Once you have downloaded it the app should appear in the CarPlay interface. (iCulture)

NovaVPN Is A Fast, Secure And Easy VPN For Apple Devices [Review]
How To Remove Apps From App Store Purchase History [Guide]