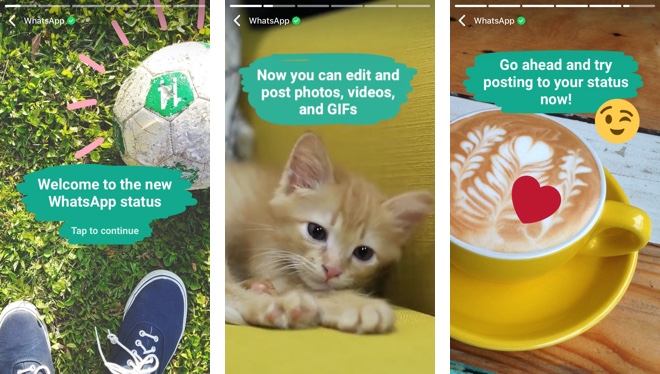 WhatsApp has started rolling out a brand new feature called WhatsApp Status. Although the name reminds us of the boring text based statuses WhatsApp has had for years, this new feature is anything but boring. The new Status is WhatsApp’s attempt at taking on Snapchat, enabling users to share latest happenings in their lives through photos and videos. Just like Snapchat Story, WhatsApp Status is temporary and expires after 24 hours.

To make Statuses more than just photos and videos WhatsApp is also offering built-in editing tools that allow users to add captions, emojis, text or drawings over their recordings. Tap once to shot a photo or hold the shot button to record a video. You also get basic image editing features like rotate and crop. The image and video editing UI uncannily reminds user of Snapchat.

Unlike Snapchat users can share images from their camera roll without anyone knowing if the image was taken live or a week ago. As opposed to this Snapchat displays a border around the image indicating the image shared on the story is old.

The new feature is not without its problems. WhatsApp is pushing the feature hard as it has redesigned the button bar to add Status and Camera tabs, while inconveniently removing Contacts tab. There’s also a privacy concern for WhatsApp Status feature, as by default anyone can see your story even if you don’t have them in your contacts but they have you in their’s. You have to manually change the privacy settings to exclude certain users from being able to view your status or only show status to selected users. There are no notifications for screenshots, which is also a privacy concern for many users.

WhatsApp is automatically rolling out the Status feature to users from the backend. So you don’t need to update the app to get it. You will see a new Status tab once the feature is activated for your account.