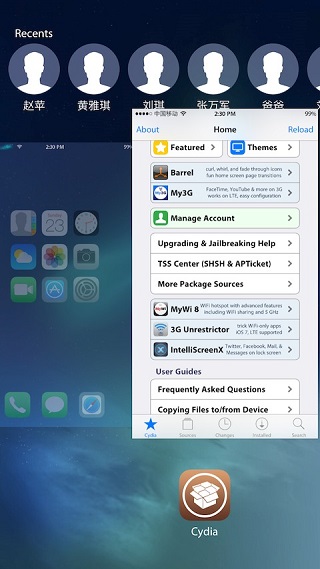 Archer is a new jailbreak tweak for iPhone and iPod touch that makes it faster and more convenient for users to perform different actions. With this hack installed you will be able to easily perform different actions by simply performing an on-screen gesture. Archer adds gestures for switching between apps, bringing app switcher, closing apps, locking device and more. After downloading Archer tweak you can get to the app switcher by swiping up on the screen instead of double pressing the home button.

To switch between two apps you can swipe in from left or right side of the screen in order to jump to the next app in switcher. This functionality is similar to what was possible with popular Zephyr tweak of iOS 6.

If you are someone who doesn’t like to press the home button again and again Archer can make your life a lot easier by letting you return to the homescreen by sliding up on the screen. Similarly you can lock your iPhone by swiping on the homescreen.

Archer even lets you kill all apps running in the background by swiping on the app switcher screen. Something that would normally require you to download a separate tweak.

You can download this tweak from Cydia for $1.88. It runs on iPhone and iPod touch.