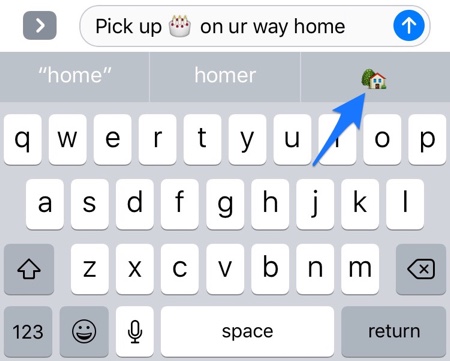 Do you find the new Emoji suggestion feature of iOS 10, which suggests appropriate emojis in the predictive bar as you type useful. Are you still running jailbroken iOS 9 on your iPhone, iPad or iPod touch? If the answer to those questions is yes, then you are going to love the new EmojiSuggest tweak from Cydia. The new hack brings the iOS 10 feature of emoji suggestions to iOS 9, allowing users to replace typed words with the most suitable emoji with tap of a button.

EmojiSuggest tweak supports about 700 words, which means when you type any of these 700 words you will see an emoji suggestion. To replace a word with emoji all you have to do is tap it in the word suggestion bar that appears right on top of your keyboard. In addition to replacing the word the tweak also offers an option that lets users add an emoji next to the word rather than replacing it. You can configure this behavior of the hack from tweak’s settings.

Adding an emoji by searching for it in the emoji keyboard can feel like a hassle to many users. Having the ability to quickly type the emoji based on the typed word can make the life of users quite convenient.

If you use other predictive bar iOS 9 tweaks like MorePredict or PredictionShortcuts, then don’t worry as EmojiSuggest is fully compatible with them. You can download EmojiSuggest from Cydia for free.