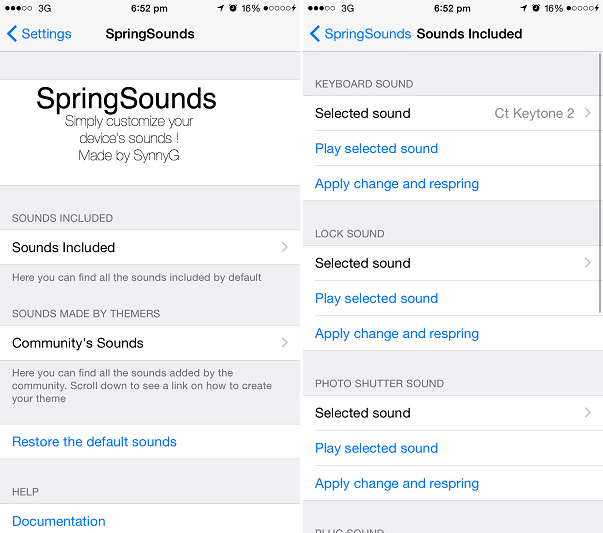 If you have been wanting to change the sounds your iPhone or iPad makes when you perform certain tasks then now is your chance. The new SpringSounds tweak allows users to customize the sounds of different sections of iOS, letting them choose the sound they like. As of right now the tweak has the ability to change sounds of keyboard clicks, camera shutter, plug in and out, as well as sent and received messages. To change all you have to do is open the Settings application and from ‘Sounds included’ section select the tunes you like.

After you have selected the sound of your choice you can hit the ‘Apply change and respring’ button for the changes to take effect. You can apply different sounds for different parts of iOS. Don’t forget to get your device out of vibration mode before testing the changes. You can also preview the sound before applying it b hitting the ‘Play selected sound’ button.

Right now SpringSounds includes 32 sounds, most of which are iOS’s default ones. However users will be able to add new sounds to the tweak and apply them from the ‘Community’s Sounds’ section. The developer has promised to make the tweak better by adding more sound options, which also includes the Siri sounds.

You can download SpringSounds tweak on your jailbroken iOS device for free. It fully supports iOS 8 powered devices.