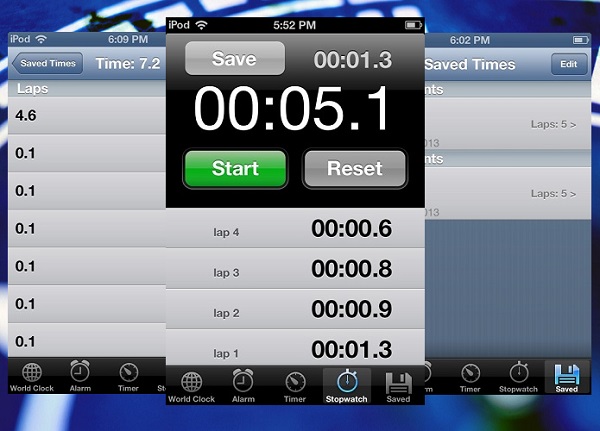 iOS devices are equipped with a Clock.app by default, which not only allows them to check the current times for different cities of the world but also includes Alarm, Timer and Stopwatch functionalities all in one place. The Stopwatch feature of the stock Clock app works fine and does the job pretty well however if you want to save your logs to access them later you are out of luck and have to rely on third party apps available through the App Store.

Thankfully if you have jailbroken device you can add the feature to the Clock app’s Stopwatch section making it capable of saving your logs. The Stopwatch Pro tweak for jailbroken iOS adds this functionality within the stock application.

After Stopwatch Pro tweak is installed on an iOS device users will find a new ‘Save’ button using which they can save their logs. These saved logs appear in a separate ‘Saved’ tab which appears in the navigation bar located at the bottom of the screen. The tweak is capable of recording each lap accordingly so you can have a detailed report of your saved logs.

The Stopwatch Pro tweak even allows users to classify their logs under headers. Users can create new headers for their logs by tapping on the ‘Edit’ button. They can also reorganize their logs by moving them from one header to another.

This is a must haev functionality for someone who uses his or her iPhone for logging purposes while jogging or doing any other activity using the Stopwatch feature of the Clock.app.

The Stopwatch Pro tweak is available in Cydia for $0.99.

How to add a repo in Cydia
How to remove Cydia from your iPhone, iPad or iPod touch using iTunes