Sometimes we reach the stage  when there’s further free space available on our iOS device. At this stage we have to delete some of the apps we have downloaded previously in order to free up space to install new apps or other types of data. Now when we try to delete apps we no longer use on our iPhone or iPad we have to use our best guess when selecting apps that are taking considerable disk space or look into Settings.app for the purpose.

Many times when getting rid of apps to free up space on iOS device I ended up deleting apps that weren’t taking much space and deleting them didn’t help at all. At that moment I wondered if only there was a quick way to know how much does an app weighs in terms of memory usage at time of deletion. 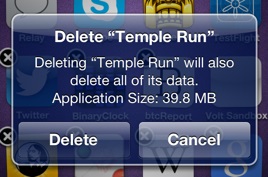 It looks like someone was listening and now we have a new Cydia hack for iOS called the Uninstall Application Size tweak. This simple tweak has only one application and that is it adds the size of the app you are deleting in the confirmation menu. So whenever you try to delete an app with Uninstall Application Size tweak installed the confirmation dialouge pop up would also how the MBs or GBs an app is taking up on your iOS device.

It is a pretty handy tweak, which adds a useful feature to the homescreen. There are no settings to configure and Uninstall Application Size tweak works right away after being installed from Cydia.

You can download this tweak for free from the BigBoss repo.