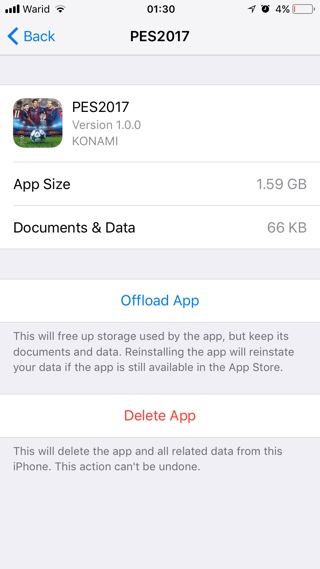 If you have ever ran out of storage on your iPhone or iPad, and chances are you have, you are going to love this new iOS 11 feature. The feature is a special button called Offload App, which makes it possible for users to delete an app from their iOS device without deleting its documents and data. This means if you are deleting an app temporarily only to free up some space you can delete the app but its data will remain on the device. You can later reinstall the app, after which data will be reinstated on it just like it was before you deleted it.

The Offload App feature of iOS 11 will make the lives of iPhone users much easier, since before it users have been forced to delete apps and their data in order to free up some space on their iPhone. The next time they reinstall the app they have to start from scratch.

The Offload App option can be accessed from the new ‘iPhone Storage’ section of iOS 11. To access this button for any app simply go to Settings > General > iPhone Storage. Then from the list of apps tap on the one you want to offload. Finally hit the ‘Offload App’ button to get rid of it, while keeping its data on the device for later use.

You will see the ‘App Size’, which is essentially the amount of space you will be freeing if you offload – and ‘Documents & Data’, which shows how much space that app’s data is taking and will continue to take if you ‘offload’ it. If you would rather get rid of both the app and its data, then you can tap on the ‘Delete App’ button.

iOS 11 brings many space saving features to iPhone and iPad. Users can also choose to make iOS offload apps that they rarely use automatically to free up space for other things. The option to Offload Unused Apps is available through Settings > iTunes & App Stores page.