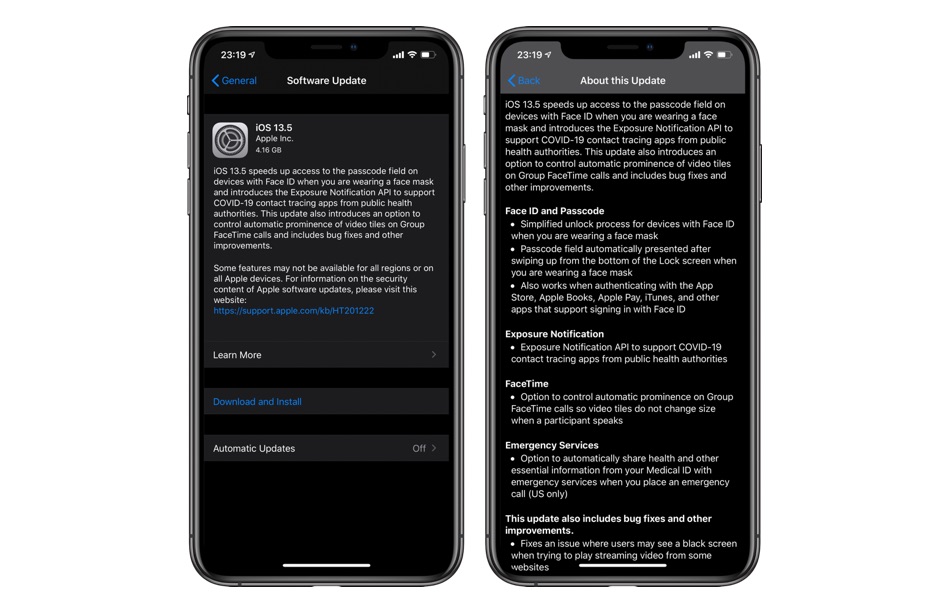 Apple has seeded iOS 13.5 and iPadOS 13.5 GM to developers. This means Apple is preparing a public launch for the software update and will release it to the public in the coming days. In addition iOS 13.5 GM, watchOS 6.2.5 GM has also been released to developers.

iOS 13.5 is major release that brings a number of changes to the operating system. Most notable changes in this release are related to the ongoing COVID-19 pandemic.

In iOS 13.5 Apple has made specific changes in the operating system to facilitate users and to help with the control the spread of the disease.

On the user side Apple has made it easier to unlock Face ID enabled devices for iPhone users wearing a mask. Since wearing a face mask has become a norm these days, iPhone will recognize when the user has a mask on and directly ask him or her to enter passcode.

This saves time and makes unlocking iPhone while wearing a face mask easier. This sort of mask detection will also work when authenticating an App Store purchase, when using Apple Pay, Apple Books and iTunes. Apps that take advantage of Face ID for logins will also support it.

With iOS 13.5 Apple has activated Exposure Notification API, which will allow public health authorities all over the world to create COVID-19 tracing apps.

In the US users will now have the option to automatically share health and other essential information from their Medical ID with emergency services.

FaceTime video calling has also received a change in this release. Now users will have the option to disable automatic prominence feature on Group FaceTime call. Now users will be able to turn off the feature that makes the video tile of user who is speaking larger.

Bug fixes in this release include fixing of the bug that caused black screen to appear when streaming videos from some websites.

A bug that caused share sheet actions and suggestions to not load has also been fixed.

Update: Apple has released watchOS 6.2.5 to all Apple Watch users with supported devices.