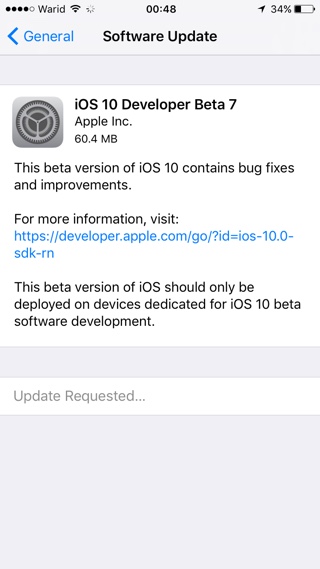 As we draw closer to official iOS 10 public release in September it seems like Apple is speeding up the process of beta testing as the company has released yet another iOS 10 beta. The previous beta was released on August 15th so the seventh developer beta has been released just after four days. In addition to the developer beta the company has also released the sixth public beta of iOS 10, which is now available to everyone registered with Apple’s public beta program.

The iOS 10 beta 7 for developers can be downloaded over-the-air on devices running previous version of beta or it can also be downloaded through the dev center. The new beta is released for all iOS 10 models of iPhone, iPad and iPod touch. Now new features or major changes have been discovered in this release, which seems to be focused on improving performance and bug fixes.

Same is true for the sixth public beta that also does not bring any new features to iOS 10 being tested by non-developers and general iOS users.

When iOS 10 will finally be released for all users it will bring a ton of new features including new features for Messages app, redesigned News app, a new Music app, Siri improvements, Redesigned Control Center and Notification Center, a revamped homescreen that now offers widgets and more. You can follow our iOS 10 coverage here.