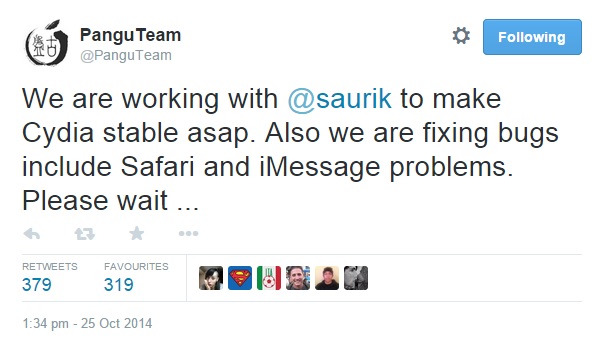 We have got another exciting update from the whole Pangu8 jailbreak for iOS 8 scene. Now Pangu Team has announced that they are working with Saurik, who is the creator of Cydia to include a stable and fully working version of Cydia in the upcoming release of Pangu tool. This means in the next release users will be able to install jailbreak as well as Cydia on their device without needing to follow complicated steps to get it. No ETA has been given apart from the polite “Please wait” message in their tweet.

Apart from integrating Cydia into the Pangu tool the team also announced that they are aware of the bugs found in current jailbreak release that are affecting Safari and iMessage apps. They assured everyone that they are working on fixing these issues and the next stable release will not cause these problems.

It has been a few days since the release of iOS 8 jailbreak and we have made a significant progress. We are sure it won’t be long before we will see the release of less problematic version of Pangu that will come bundled with Cydia.

We will let you know of any further developments related to this topic. In the meantime see our entire coverage of iOS 8 jailbreak here.

Click to comment
ConvoPics tweak brings iPhone 6 Plus’s message pictures to all devices
Activator, iFile, Eclipse, FlipSwitch and more are on their way to iOS 8